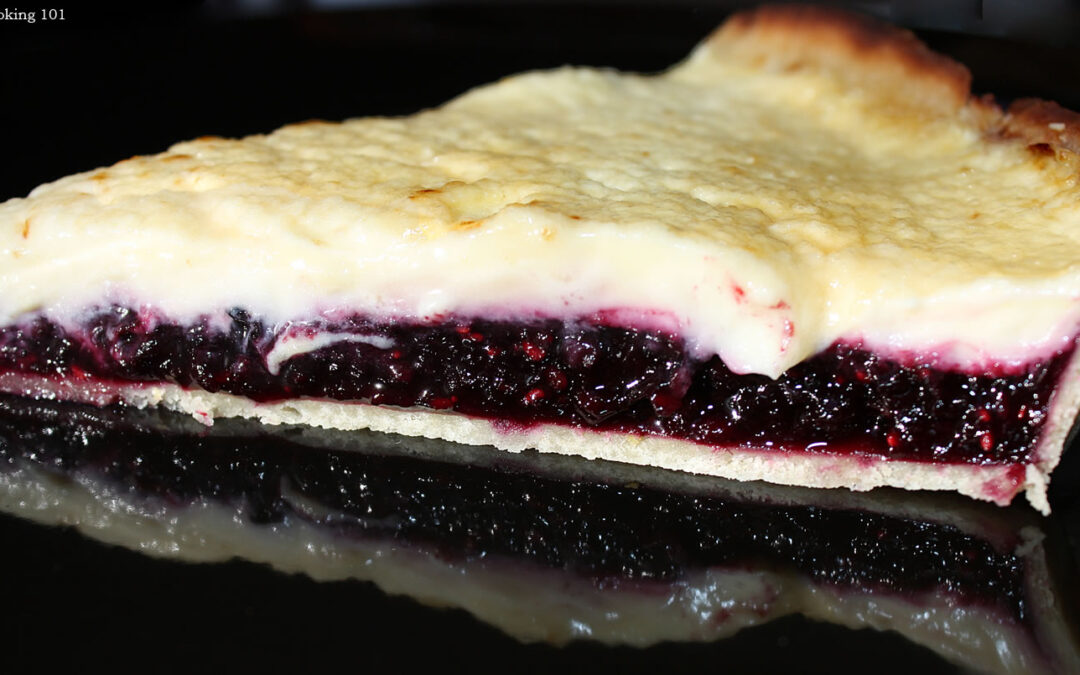 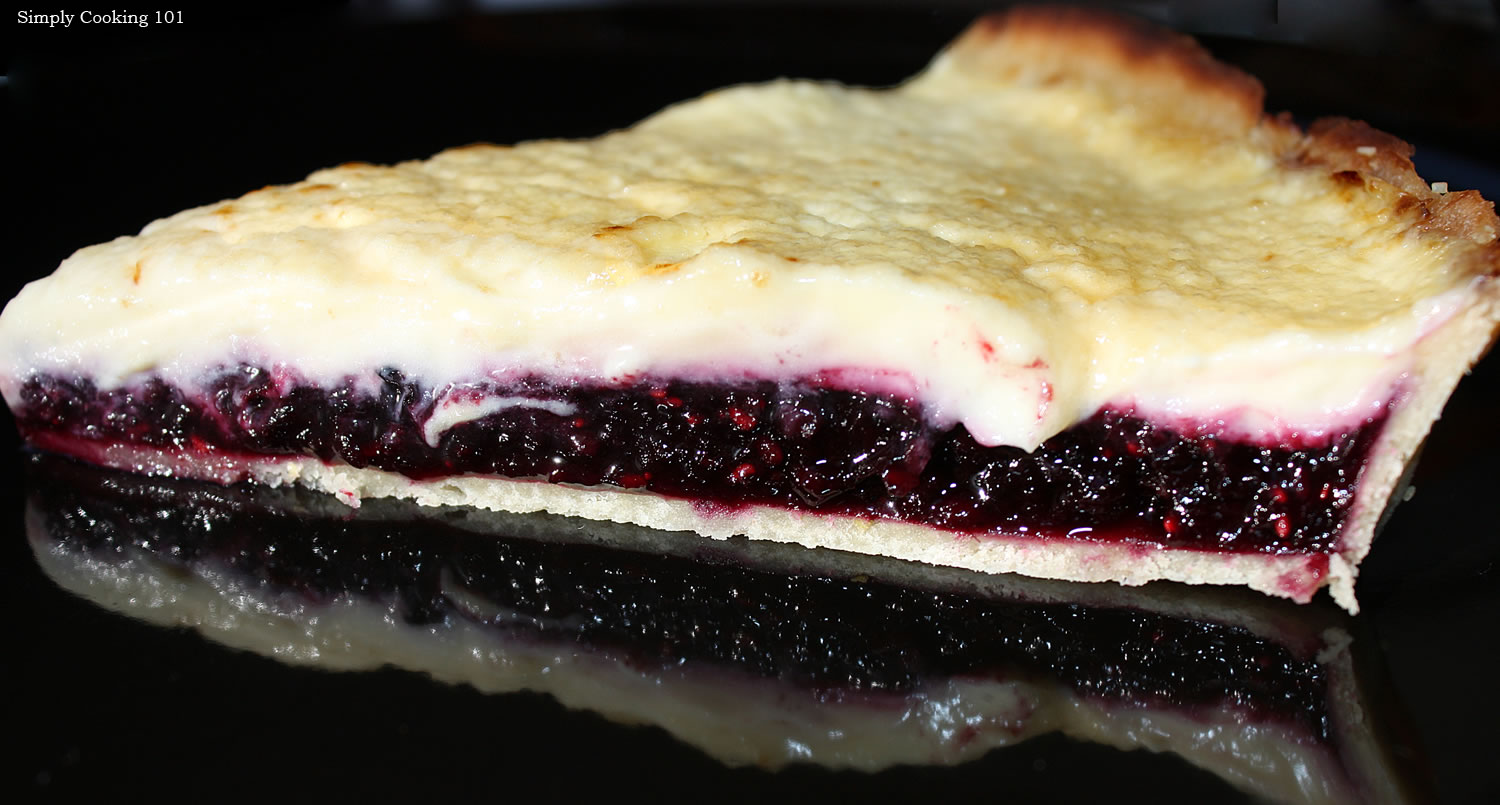 The 2010 November Daring Bakers’ challenge was hosted by Simona of briciole.  She chose to challenge Daring Bakers’ to make pasta frolla for a crostata.  She used her own experience as a source, as well as information from Pellegrino Artusi’s Science in the Kitchen and the Art of Eating Well.
I chose to make a semi-traditional version,  jam, combined with one of my family’s favorites, Creme Brulee.  It was wonderful and everyone loved it, thanks to Simona for the great idea! 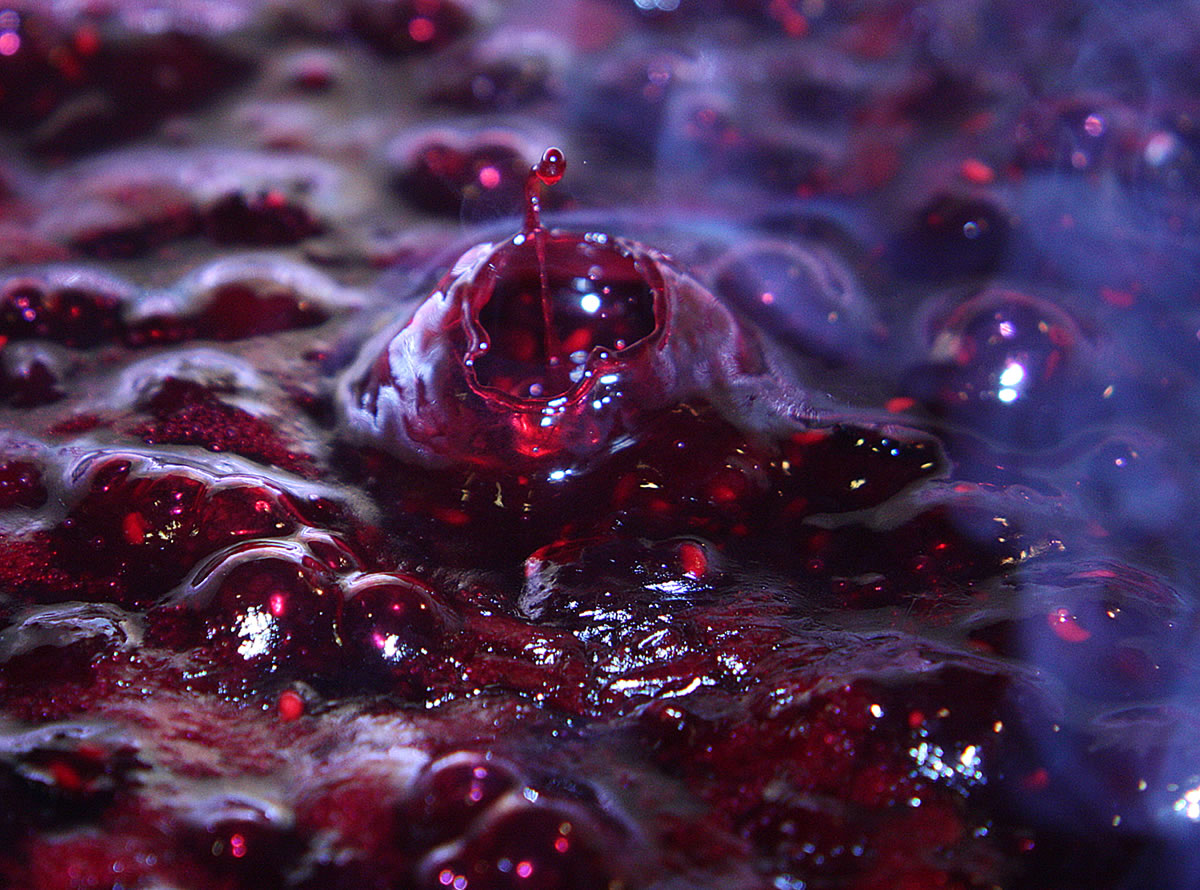 Blueberry popping in the jam

First I made the jam.  I know a lot of people are afraid of it, but it is really quite simple and this recipe is quick and easy.  If it were in season I would use fresh berries, but since they are not, I used frozen berries (from Costco or Sam’s Club) which also cuts down on the prep time a little as they are all ready to go.
Ingredients:
4 lb frozen mixed berries (blueberry, marionberry and raspberry)

4 cups sugar
1 package liquid pectin
Method:
Put 2 small plates in your freezer.  Add all ingredients to a large heavy pot (copper if you have one). 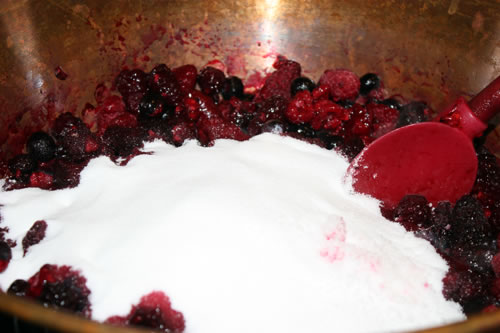 Ingredients in the copper pot

Cook over medium heat until the sugar dissolves and the jam thickens (about 20 minutes). 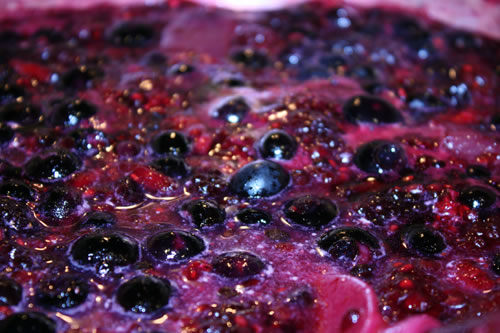 It will start to steam and when it seems thick . . . 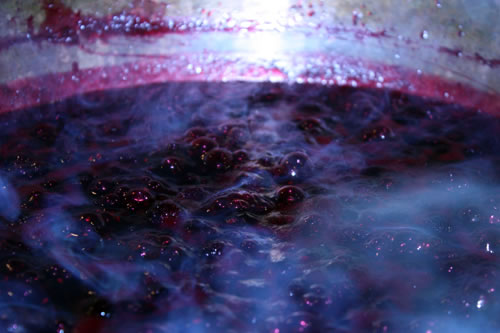 Take the plate out of the freezer and drop a small spoonful of jam on the plate, put it in the freezer for 1 minute and if it has a skin on top it is ready, if not, keep cooking and try again in a couple minutes. (Do be careful though, I managed to break one of my plates as I set it precariously in my overfilled freezer and then opened the door.)
This makes 4 pints so I used one and canned the remaining 3 for gifts. 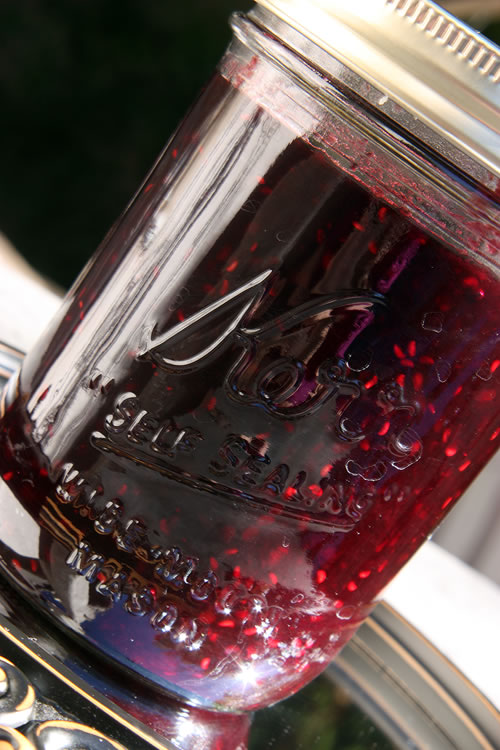 Next Step:
The Crostata.  Following the directions for Version 1 of pasta frolla from Simona I prepared the crust.
I love home made baking, but I do allow for modern conveniences, so I used the food processor method: 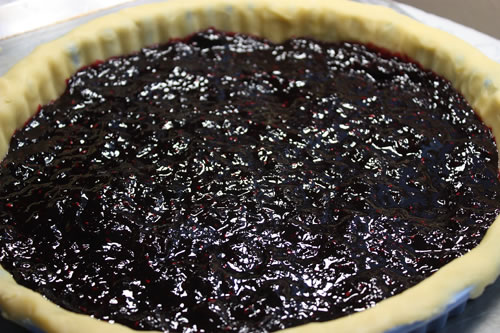 Dough in the pan with jam filling

Now bake according to Simona’s directions and cool completely, then refrigerate for at least an hour.
Next Step – make the brulee layer:
This is a stove top method for making the custard.
Ingredients:
4 egg yolks
3 tbsp sugar
2 cups heavy cream
1/2 t vanilla
1/4 cup brown (or raw) sugar
Method: 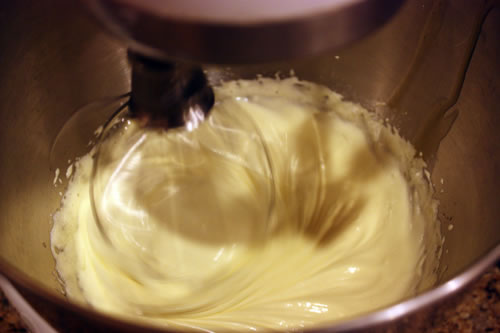 Beat the egg yolks 5 minutes or until they are thick and light yellow, gradually beat in 3 tbs of sugar.  Heat the cream in a medium saucepan over medium heat until it is just hot to the touch, add the vanilla then pour half of the cream very slowly into the egg yolks whisking constantly.  Then stir that mixture back into the cream and cook stirring constantly over low heat until it thickens, about 5-8 minutes (do not boil).
Pour over the cooled jam tart – covering with plastic wrap and refrigerate over night.  (It will look a little lumpy from the plastic when you take it out but don’t worry, when you put the sugar layer on it smooths out.) 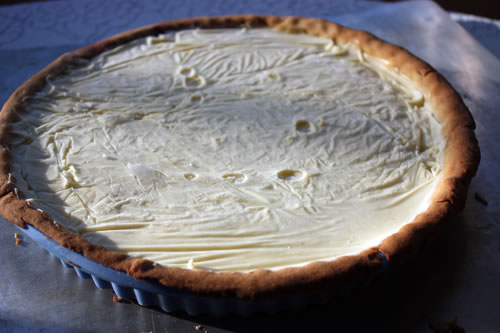 Sprinkle with brown (raw) sugar and place under a preheated oven broiler just until the sugar caramelizes.   Don’t leave – it happens fast and if it burns it will ruin your tart! 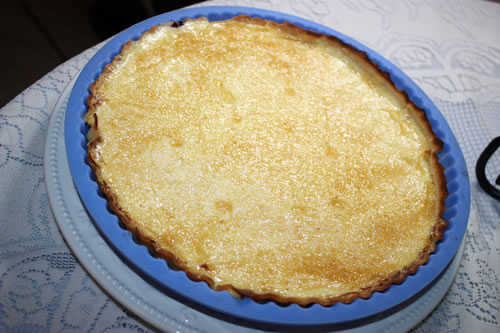 Tart done-ready to take out of the pan 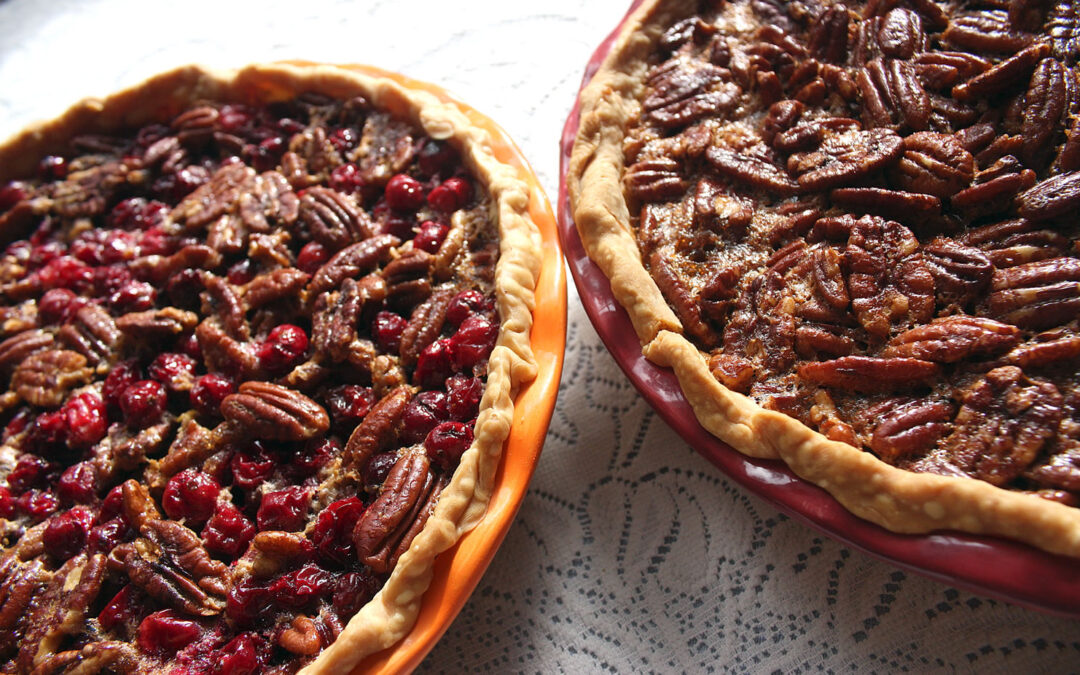 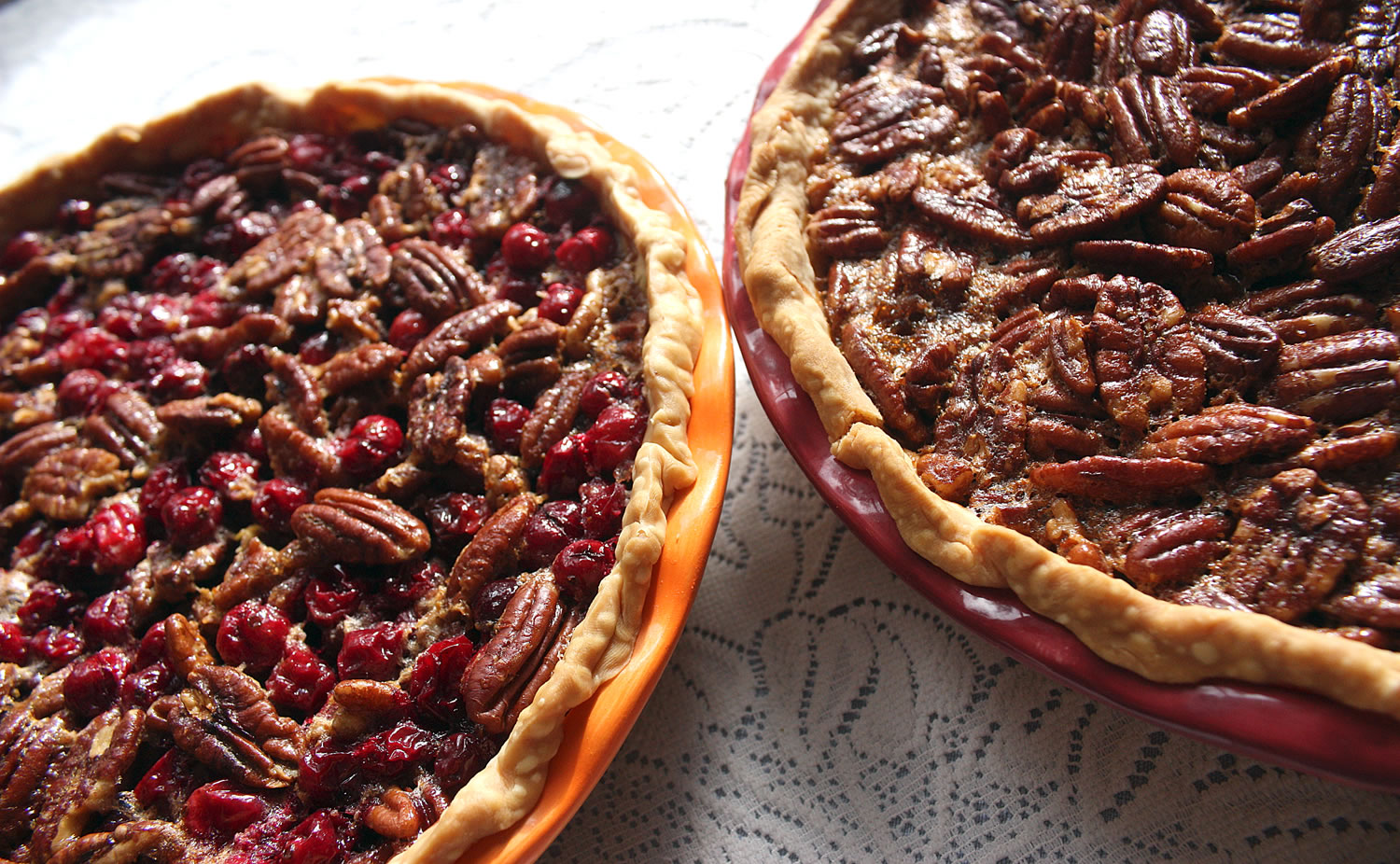 Some recipes are just so good that they are just a standby that everyone expects.  I have been asked many times for my chocolate chip cookie recipe – I refer them to the Nestles package.  The same goes for my standard pecan pie – it’s on the corn syrup bottle or at the Karo website.  I do make a slight variation (on the second one of course) and add some cranberries which gives a nice tartness that cuts the usual sweetness a little.  This year I also decided to make a little change and use some maple syrup in place of some of the corn syrup.  Of course, I do also add extra pecans, pretty much as many as I can fit in the pan.  I usually make two at a time, just double the filling recipe and instead of mixing in the pecans (and cranberries), I put them in the prepared crust, then just pour half the filling over each and mix a little with a spatula to make sure the nuts are all covered. 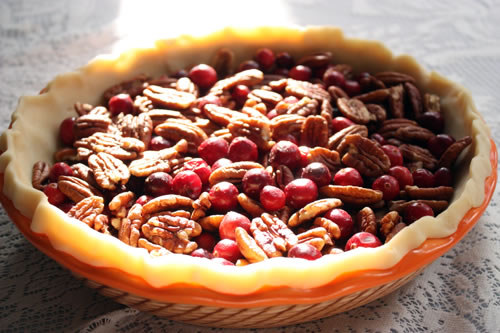 pecans and cranberries in unbaked crust 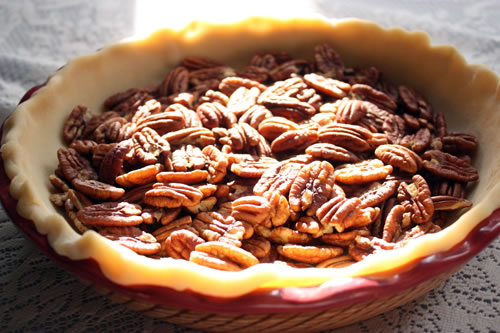 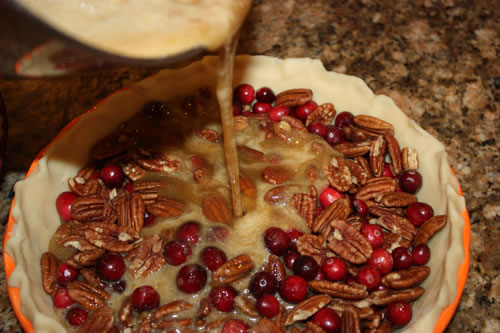 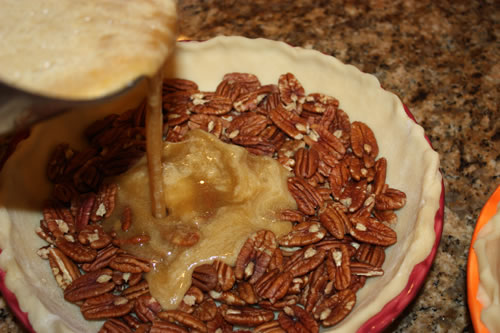 You start with a crust.  Of course you can buy one, my choice for that is Pillsbury frozen pie crusts you just thaw and put into your pan as the flavor is good and you use your own pan so you don’t actually have to admit to cheating unless you choose to.  For homemade regular crust my pick is America’s Test Kitchen Fool Proof Pie Dough using a little vodka, which seems very odd, but works.  Finally, for a very simple, pat into the pan crust here is a recipe that doesn’t need to be rolled out:
Ingredients:
1 1/2 c. plus 3 T. flour
1 1/2 t. sugar
1/2 t. salt
1/2 c. vegetable oil
3 T. cold milk
Put the flour, sugar and salt in the pie pan and mix with a fork.  In a cup, combine oil and milk and beat with a fork until creamy. Pour all at once over the flour mixture and mix with the fork or your fingers until completely moistened.   Using your fingers, pat the dough evenly into the bottom and sides of the pan.
Then you pick a the filling. 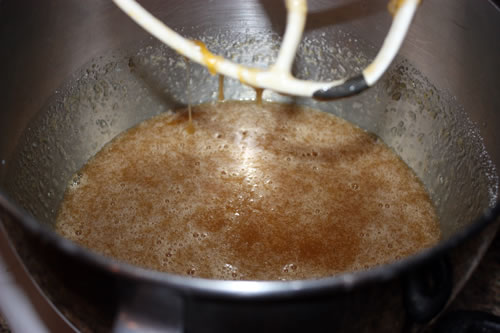 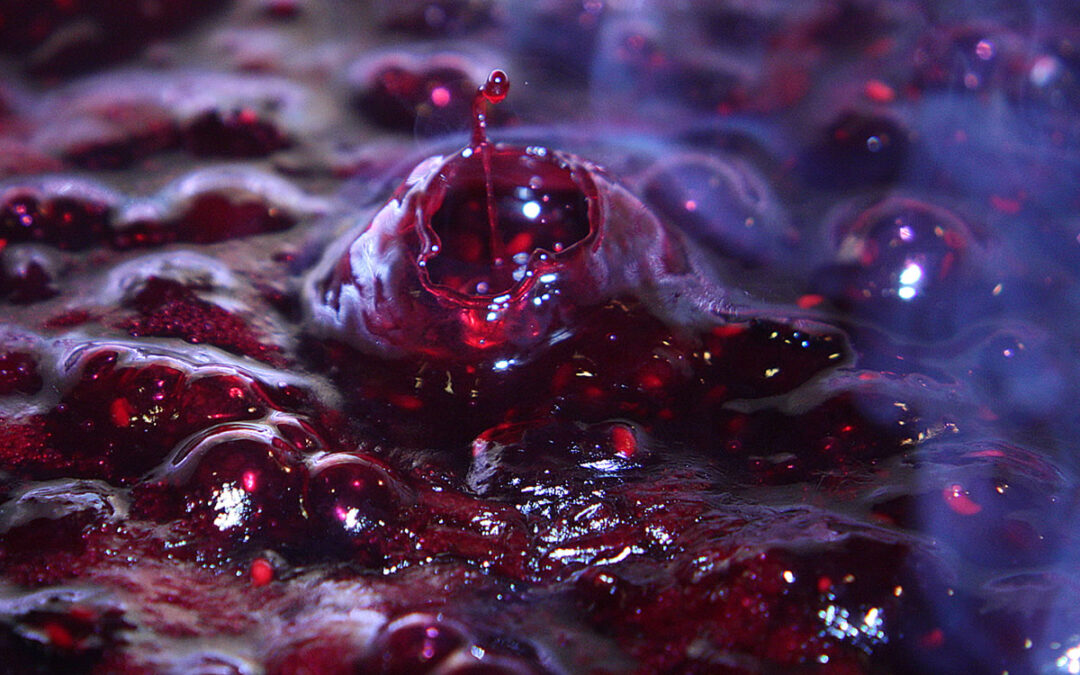 Blueberry popping in the jam

My favorite time is around the holidays and I’ve begun my annual holiday binge – an excuse to bake without restraint!  This year I’m also making a mini-cookbook with recipes for the ones I use as gifts.  I intend to have it ready soon and will post each item as I go, but I really liked this picture and didn’t want to wait to put it up.  I was making a mixed berry jam and caught the blueberry just as it popped, bubbling and releasing steam.  More to come soon! 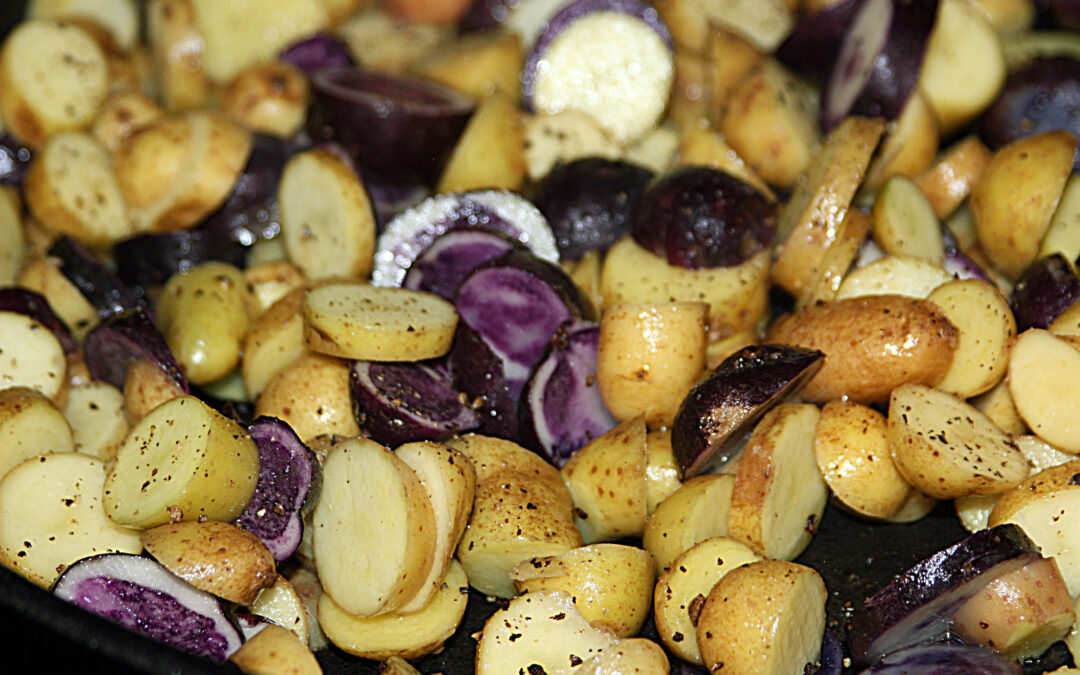 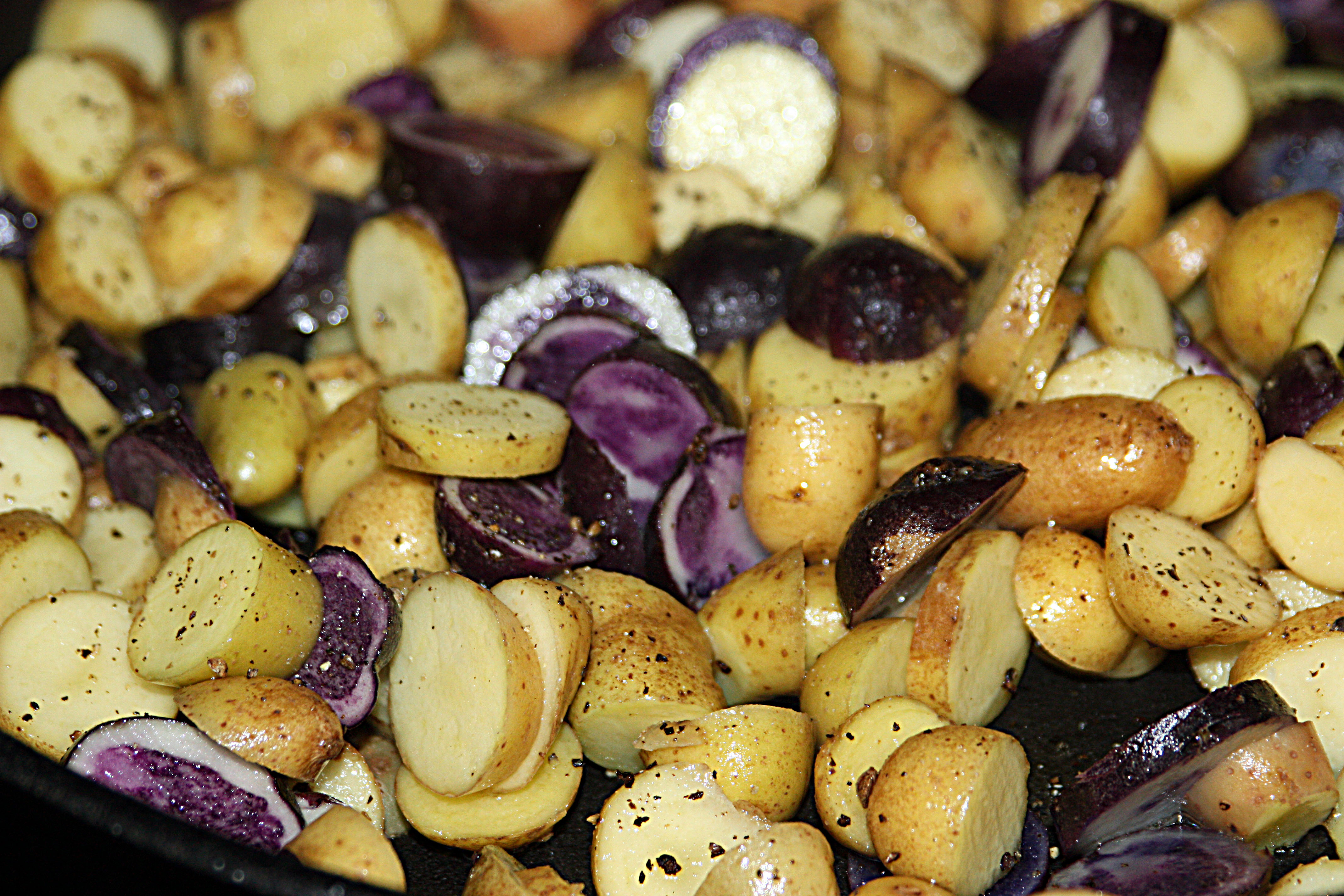 As everyone has probably figured out from so many of my recipes, I have been on a cast iron skillet kick and it has become my new favorite pan.  Cooking. com requested some product reviews on its Facebook page which I am a fan of where you can go to see all about new products and lots of cooking tips and recipes, or you can follow them on Twitter.  To be fair, you should know they also offered a gift certificate for doing it, but  you could pick your own product so of course I choose one I really like – my iron skillet.  After going through many non-stick skillets, I actually got on to the cast iron by accident.  For some reason, Husband who doesn’t cook, decided to get one but I didn’t use it for a really long time thinking it was too old-fashioned and camping like until one day I decided to make pork chops.  I normally  grill meats and rarely fry anything but after prepping, I went to turn on the grill and there was no gas so I had to go another direction.  I do like a good crust so it seemed like a good idea to try out the skillet.  After that I was hooked.  This particular pan, the Lodge 15 1/4 inch seasoned pan is the best, large enough to cook for a whole family – as you all also have probably figured out, I like to cook BIG.  I would say the only drawback to the pan might be its weight as it is a little heavy but well worth it.

The skillet is relatively inexpensive but heats evenly, holds the heat well and in a pinch makes a really good meat pounder (if you can lift it).  Well seasoned they are as good (and much more durable) than a non-stick pan.  Best of all, they make amazing homemade pizza.  Make or buy your favorite ingredients, put the pan in the oven at the highest temperature you can get, let it heat up for 30 minutes then put in a little oil and your pizza.  I find it works better than all the pizza stones I have tried.  If you search my blog, you will find at least 20 different recipes (some of the pictures are below) where I’ve used this skillet from the above mentioned pizza to chicken, pork, steak, potatoes, vegetables and desserts and I am always happy with the result. 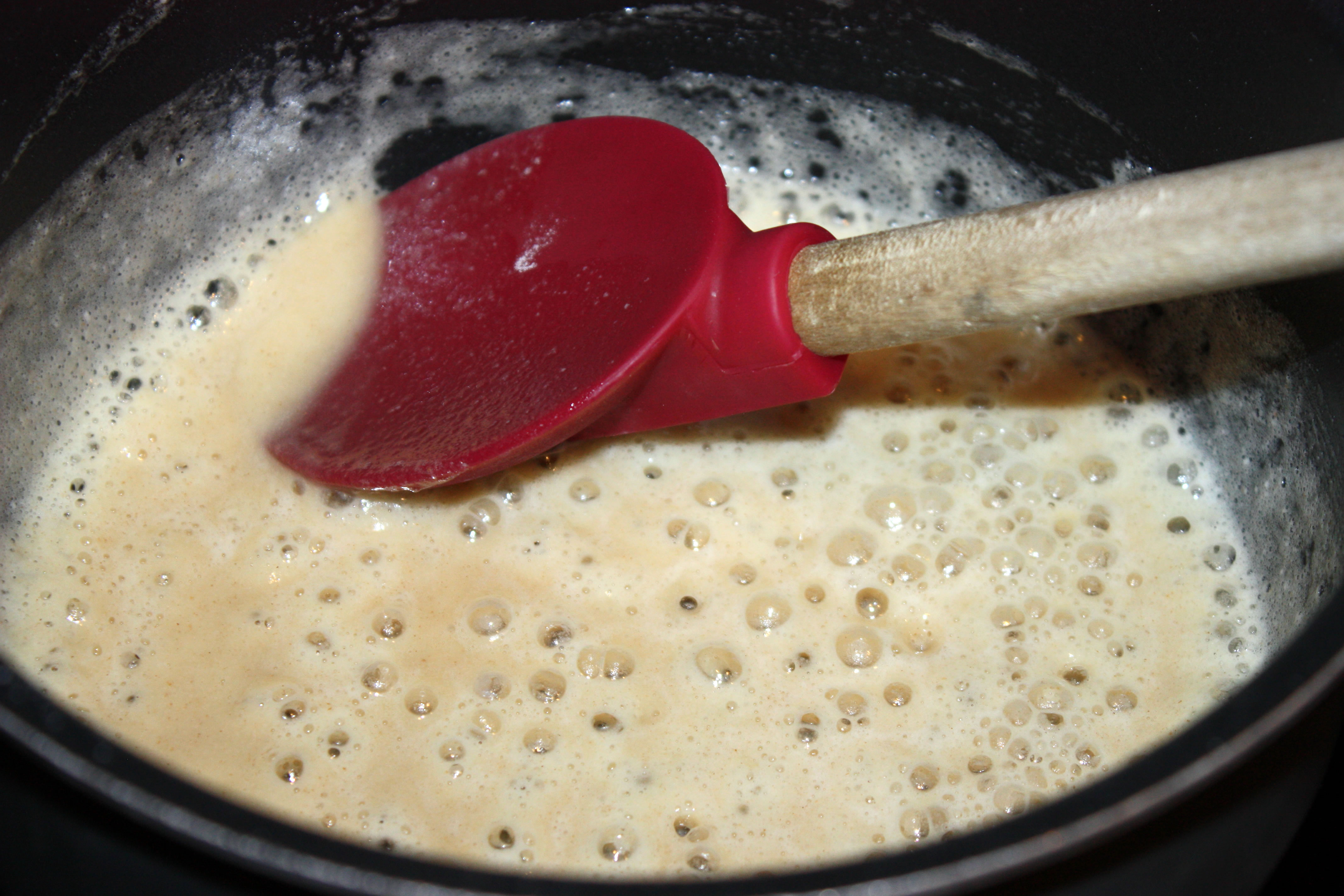 Cleaning is a little different, you never want to leave them in water (don’t use them to boil water either) but generally a quick rinse with hot water immediately after cooking, wipe with a sponge, dry  well and wipe with a little oil.  If something does stick, scrub with a mild abrasive, like coarse salt; you can also use a few drops of a mild dishwashing soap every once in a while but you don’t want to use it often or it will remove the seasoning. 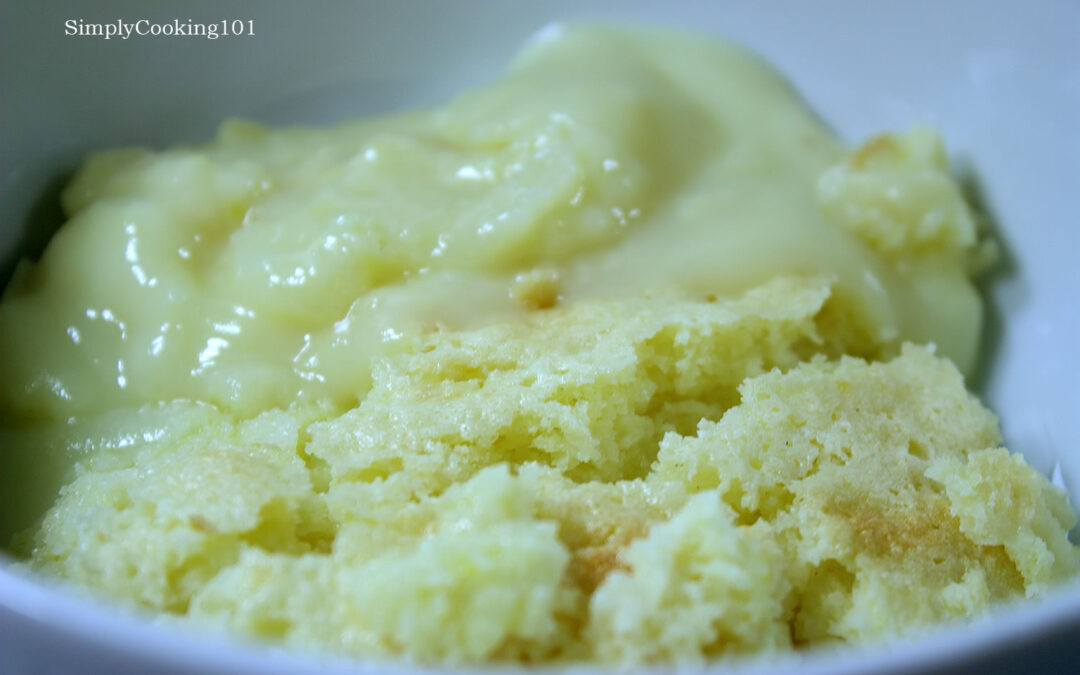 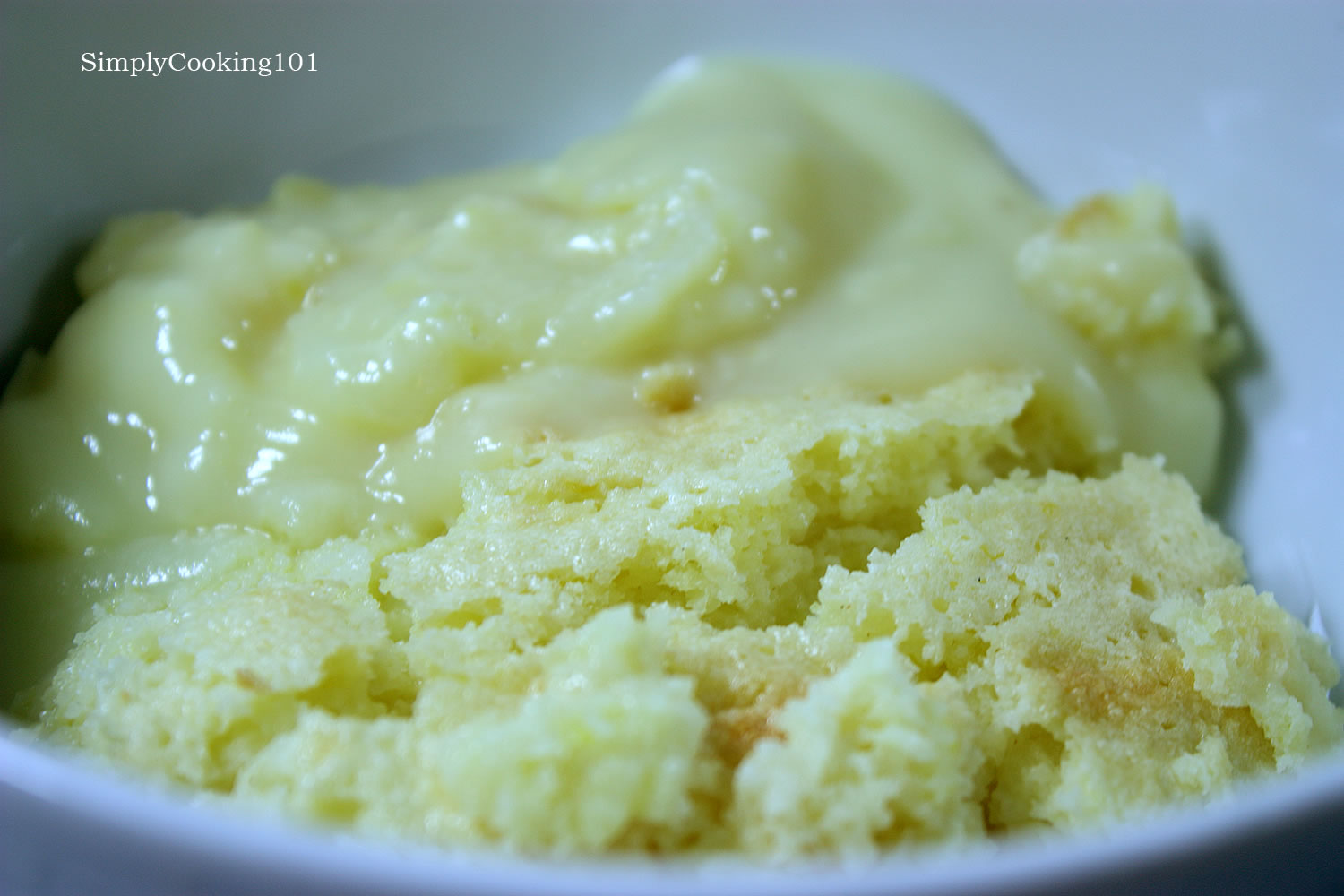 This recipe for Lemon Pudding Cake was on their show last weekend and looked good.  I actually had seen that episode before and thought about making it, but this time I had some lemons that I needed to use so it seemed like a good choice.  It was amazing, lots of lemon flavor and pretty much just like lemon pie with no crust.  It wasn’t really very cakey if that is what you prefer, but wow was it good (just to be sure I had it again for breakfast)!

The recipe has a few steps, but is basically pretty simple and quick with ingredients you probably have stocked, plus if you make it with kids, it is impressive how it separates into the layers while baking. 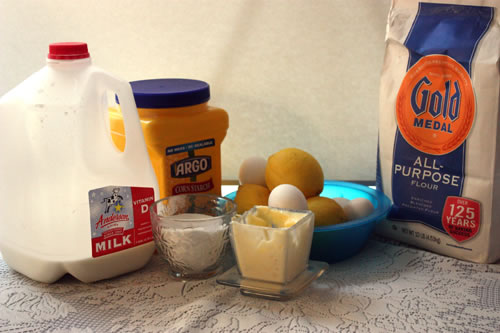 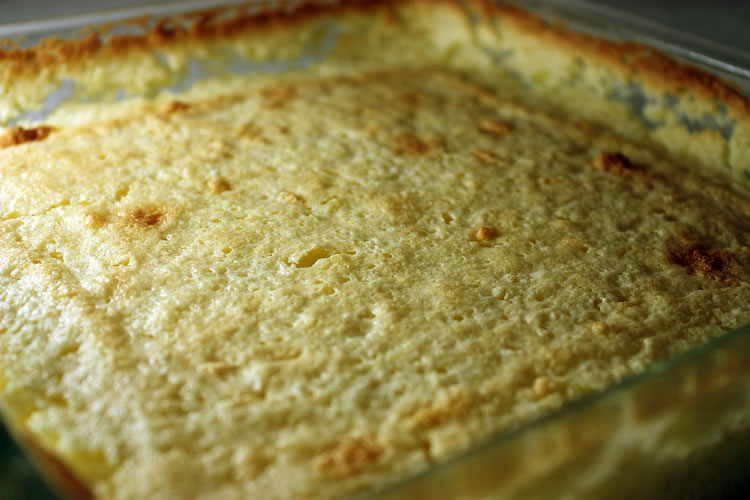