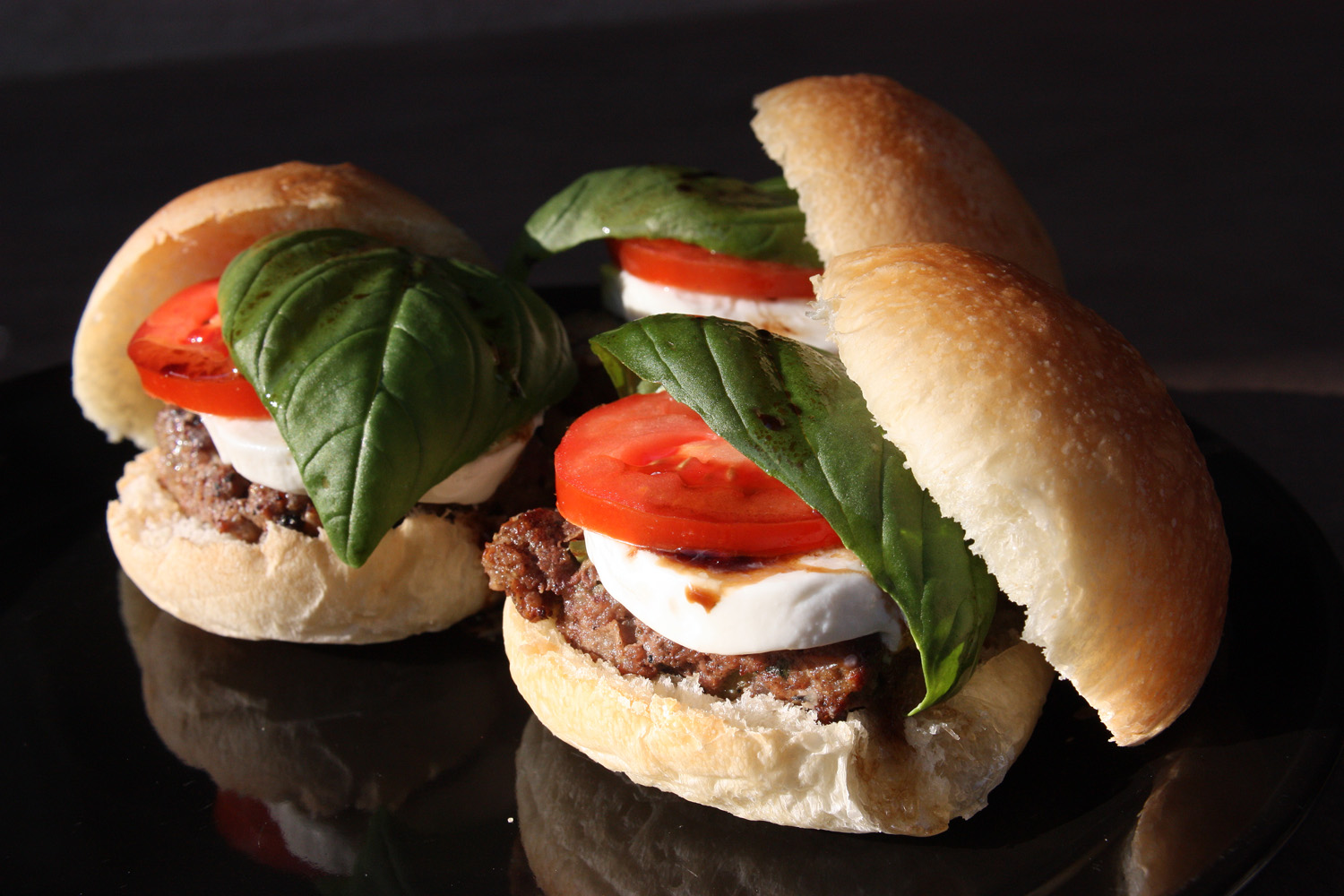 Ok I admit it, I lied. It is #NationalHamburgerDay and it’s been years now so I’m reposting this one. I’m also making them for the holiday.

I know everyone is probably tired of these, but in honor of their being chosen in the Top 5 by the LA Times Battle of the Burgers, I’m reposting them (for the last time I promise).  I’ve made a new batch because I really didn’t like the pictures in the old posts.

When I was growing up my father was a true grill man – charcoal only and whatever he was making, there was one beer to splash on the food and one for him!  I on the other hand, love my gas grill (and I think dad has one now too) mostly because I’m lazy and don’t want to mess with the charcoal.  Of course, dad would probably not been caught making “wimpy” sliders and I am generally prone to enormous burgers stuffed with cheese but as I mentioned in a previous recipe for the Bacon Sliders, my husband brought home a “slider” pan which I determined wasn’t worth much, but I did like the sliders so here’s another variation.  If you have the time, it is well worth it to make fresh rolls from either your own or the frozen dough. 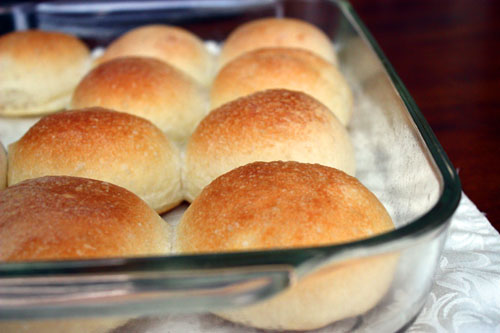 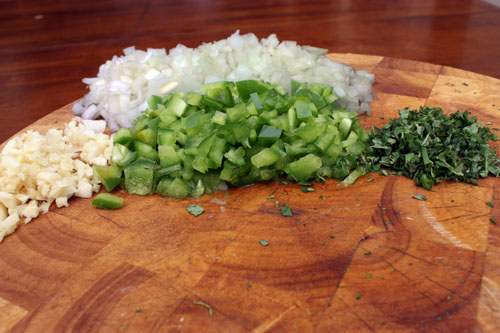 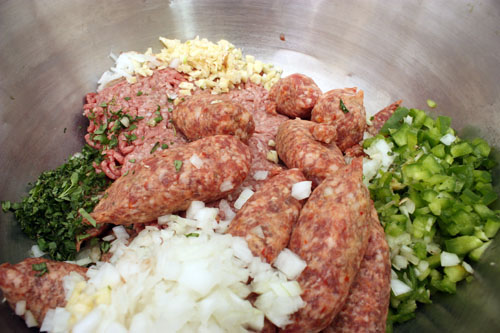 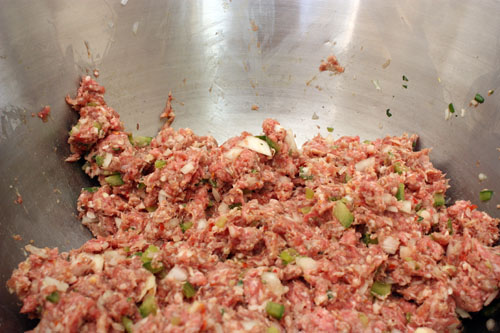 1             Gently but thoroughly mix together the ground beef and ground Italian sausage (removing from the casings if any), along with the Italian spices, chopped onion, chopped Bell pepper and 2 cloves of minced garlic. 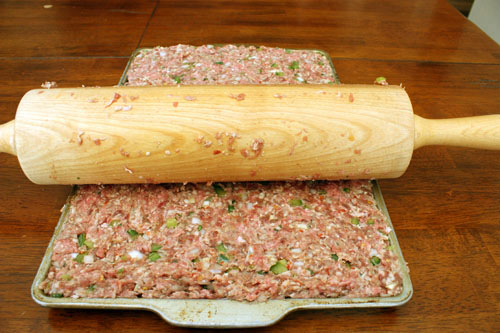 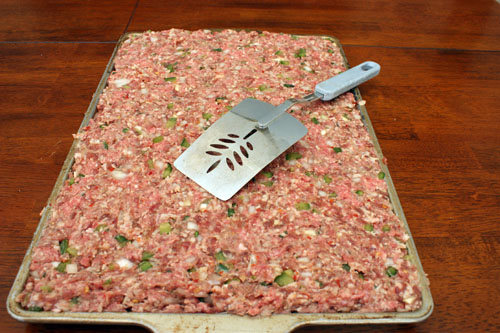 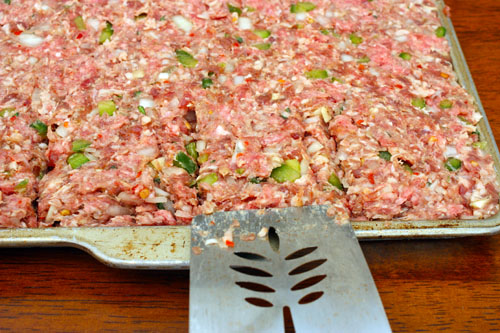 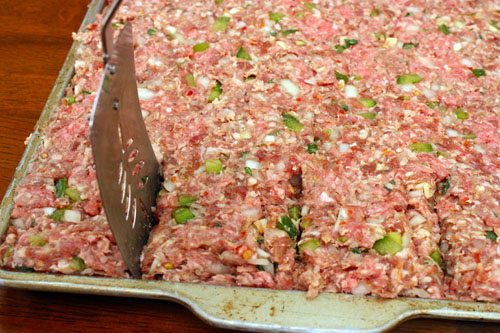 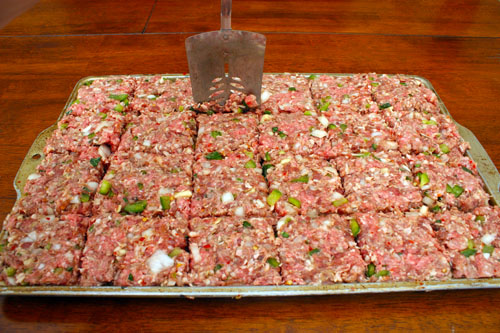 4             If not fresh from the oven, wrap the rolls in foil and warm on the top rack of the grill while the burgers are cooking on their second side.

5             When the burgers are done, place a slice of mozzarella on each burger and tent with foil while preparing the buns.

7             Place the burger with cheese on the bottom of the bun, add a slice of tomato and two good-sized basil leaves and drizzle each burger with 1/2 teaspoon of the balsamic/olive oil dressing. 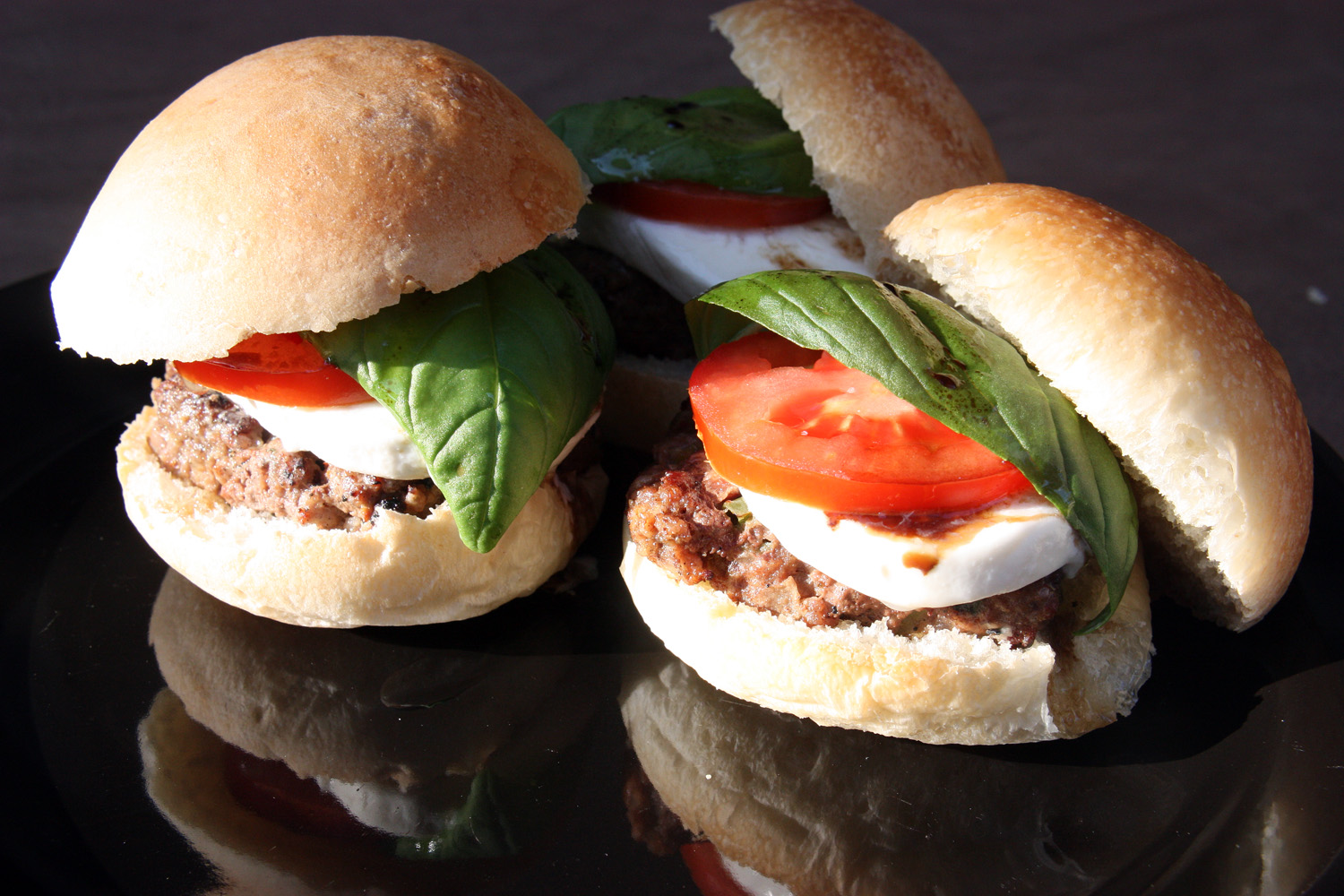 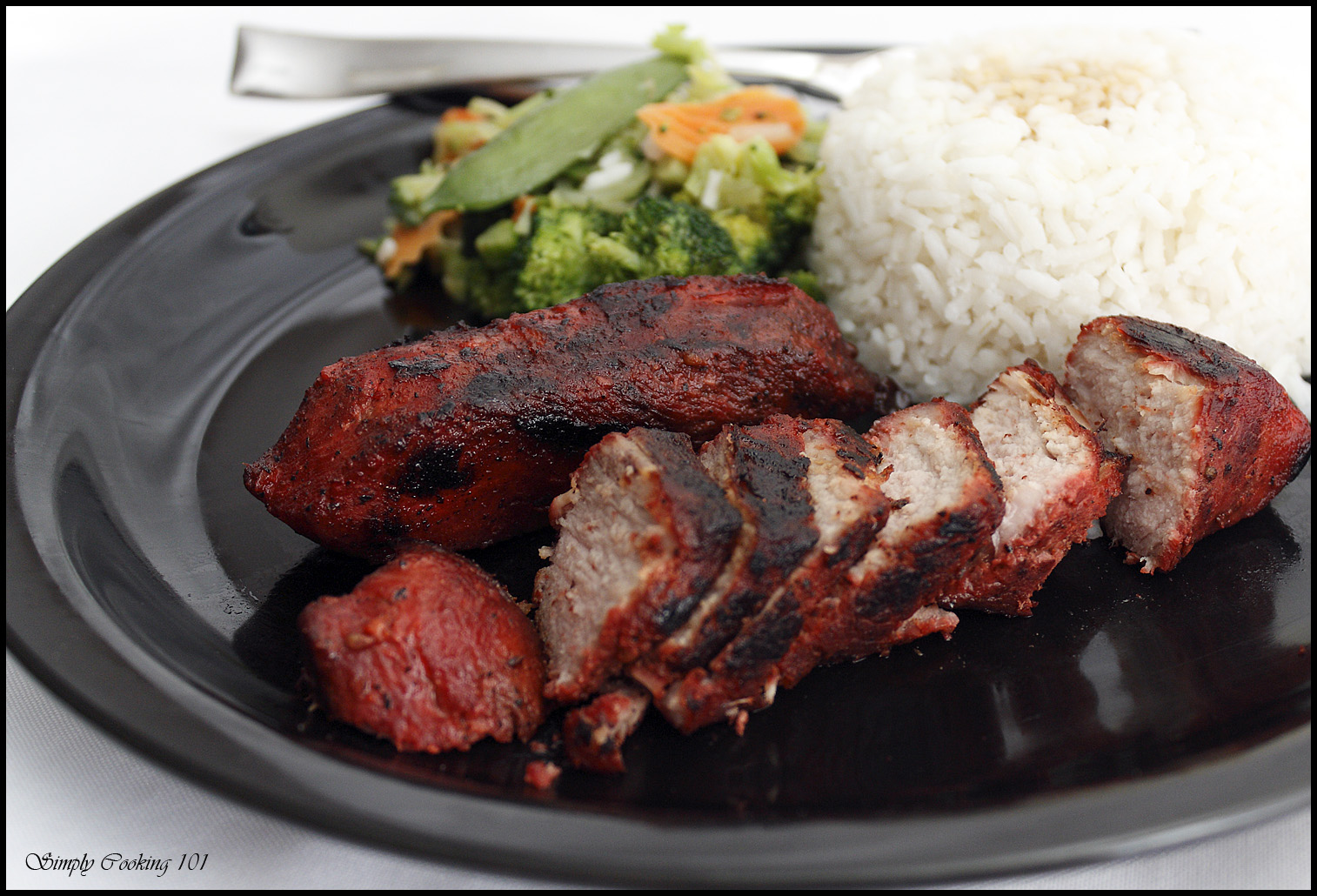 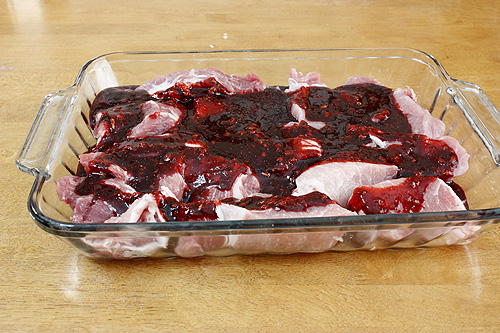 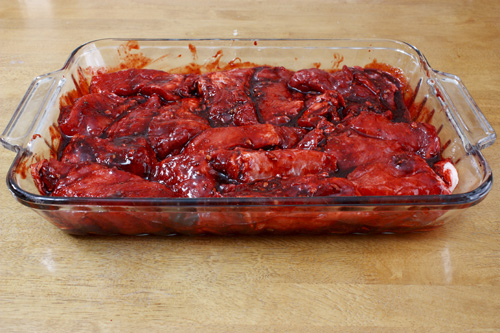 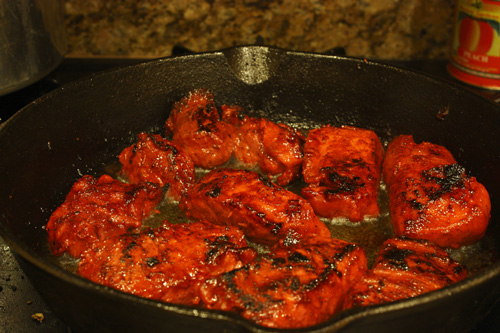 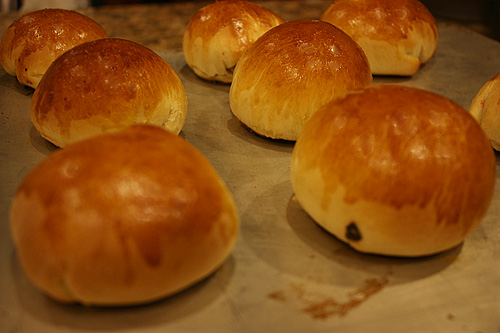 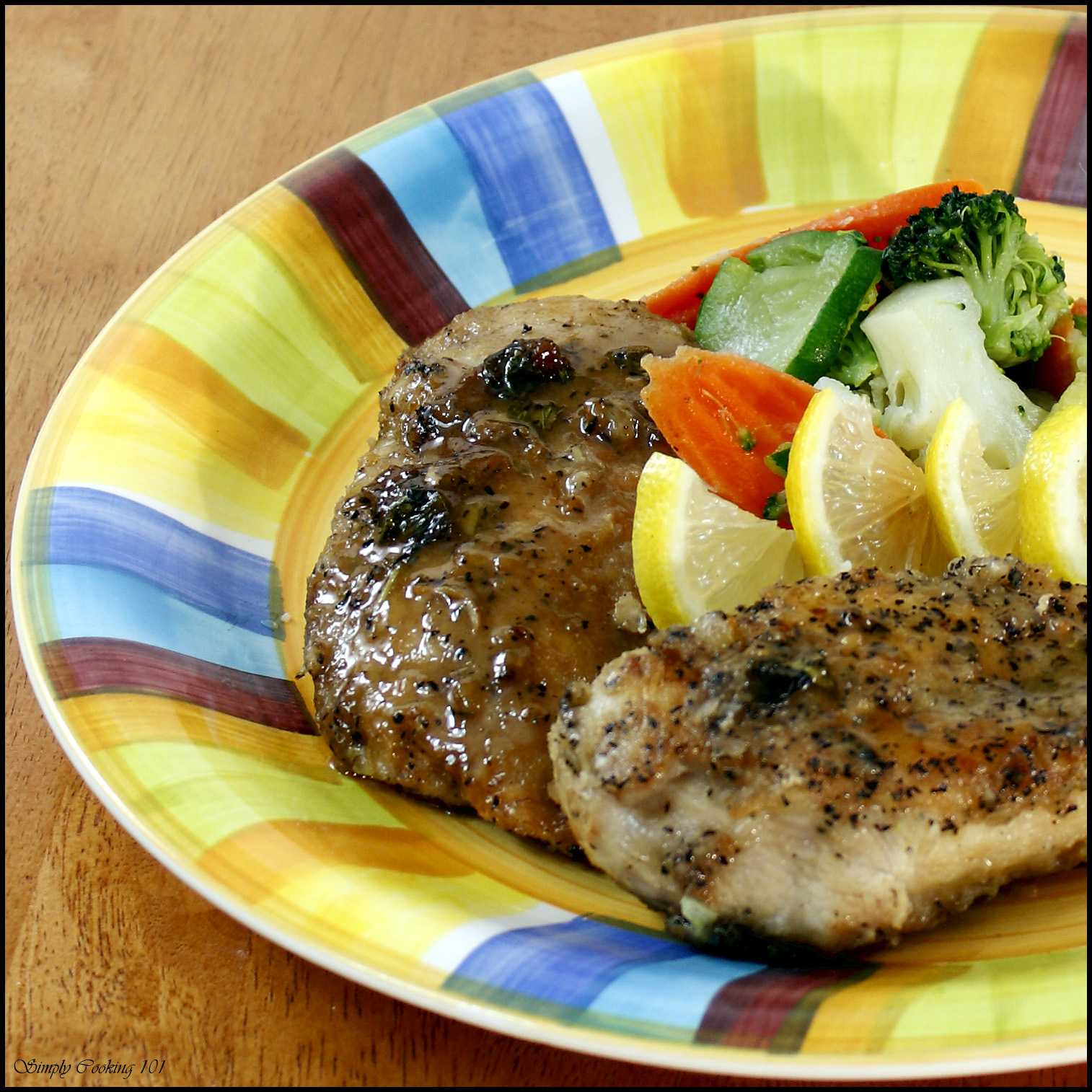 Chicken Breasts with Tea and Lemon

Once again, the Daring Cooks choose a great project for us.  Sarah from Simply Cooked was our November Daring Cooks’ hostess and she challenged us to create something truly unique in both taste and technique! We learned how to cook using tea with recipes from Tea Cookbook by Tonia George and The New Tea Book by Sara Perry.
I choose to make the Chinese Tea Eggs suggested, and Chicken Breasts with Tea and Lemon/Lime that I made up as I went along.  I also tried using it in a stuffed pepper recipe but the other flavors were too strong so the tea just didn’t come through.  The chicken worked wonderfully though and was moist and really delicious.
First I made the eggs following the recipe provided by Sarah here (with some great pictures): 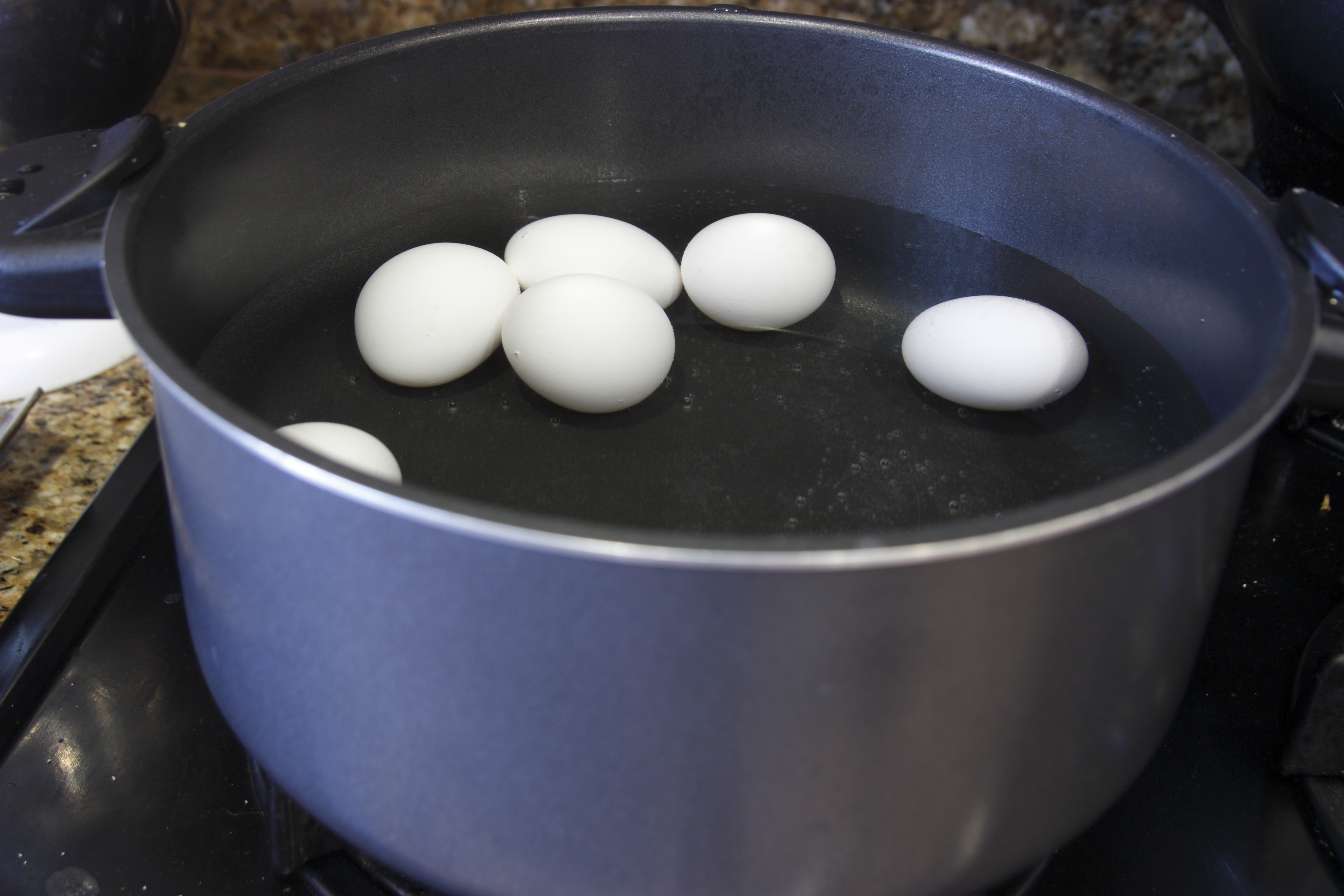 Directions:
In a large enough pot to avoid overcrowding, cover the eggs with cold water. Bring to a boil over medium heat and simmer for twelve minutes.
Remove the eggs with a slotted spoon and keep the cooking water.
With a spoon, tap the eggs all over until they are covered with small cracks. This can also be done by tapping and rolling the eggs very gently on the counter.
Return the eggs to the pan and add the tea leaves or bags, Chinese five spice powder, and salt. Cover the pan.
Heat gently and simmer, covered, for one hour.
Remove the pan from the heat and let the eggs cool down in the liquid for 30 minutes.
Remove the eggs from the liquid. Peel one egg to check how dark it is; the others can be returned to the liquid if you wish to have the web-like pattern darker. Allow the eggs to cool fully. (This is the part I should have paid more attention to as my eggs weren’t colored as much as I would have liked but as usual, my patience is sometimes lacking so I didn’t put them back.  I have to admit I’m not a hard-cooked egg fan but the official taste tester aka husband who will try anything gave them the thumbs up.) 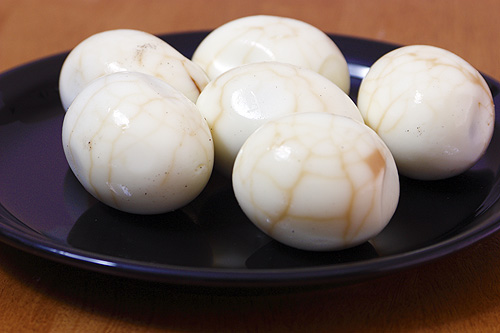 To serve, peel and slice the eggs in halves or quarters. Sprinkle with toasted sesame seeds.
Next I continued on using the boiled tea water to make the chicken:
Pot of Tea with Chinese Spice left from the eggs
1/4 cup salt
1/4 cup sugar
4-6 chicken breasts
1/4-1/2 cup corn starch
1 tablespoon black tea
Pepper
2 Tbs olive oil
1 lemon
1 lime
2 tablespoons butter
Few fresh basil leaves
Add the salt and sugar to the tea/Chinese Spice mixture and marinate the chicken breasts (in the refrigerator) for 2 hours.  If you are short on time you could double the salt and sugar and do 1 hour but I wanted the tea to have more time to infuse.
Remove the breasts from the tea brine and dry well with paper towels, then sprinkle well with the corn starch.
Heat the olive oil over high heat in a heavy pan (an iron skillet if you have one).
Add the chicken breasts, sprinkle with the tea and pepper and brown well. 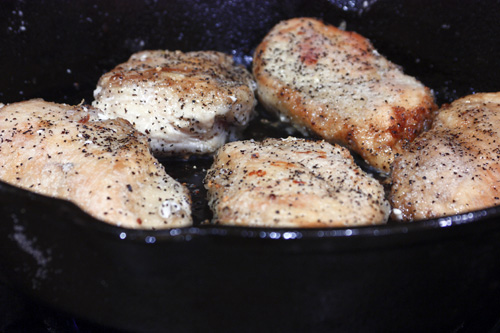 Chicken Breasts with Tea and Lemon/Lime

Once they are well browned, turn down the heat to medium and add the lemon and lime cut in half turning them occasionally.  The oils from the skins will infuse the olive oil adding a lot of flavor. 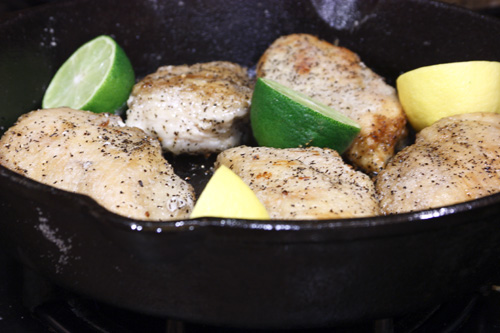 Chicken Breasts with Tea and Lemon/Lime

When the chicken is cooked to 165, remove it and set aside covering loosely with foil.
Remove the lemon/lime from the pan and carefully using a towel squeeze the juice into the pan and scrape up any browned bits.  Add the butter and basil and stir until the sauce is smooth. 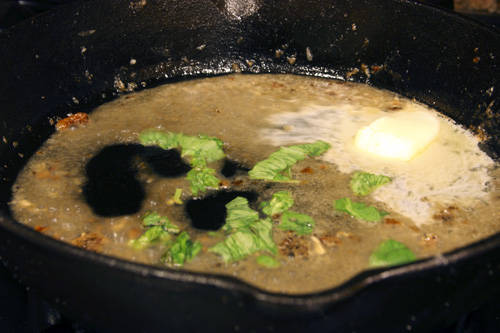 To serve, pour the sauce over the chicken.

Best meal of the summer: Fried Chicken with Poblano Mashed Potatoes and Chorizo-Thyme Gravy and Roasted Corn with Manchego & Lime 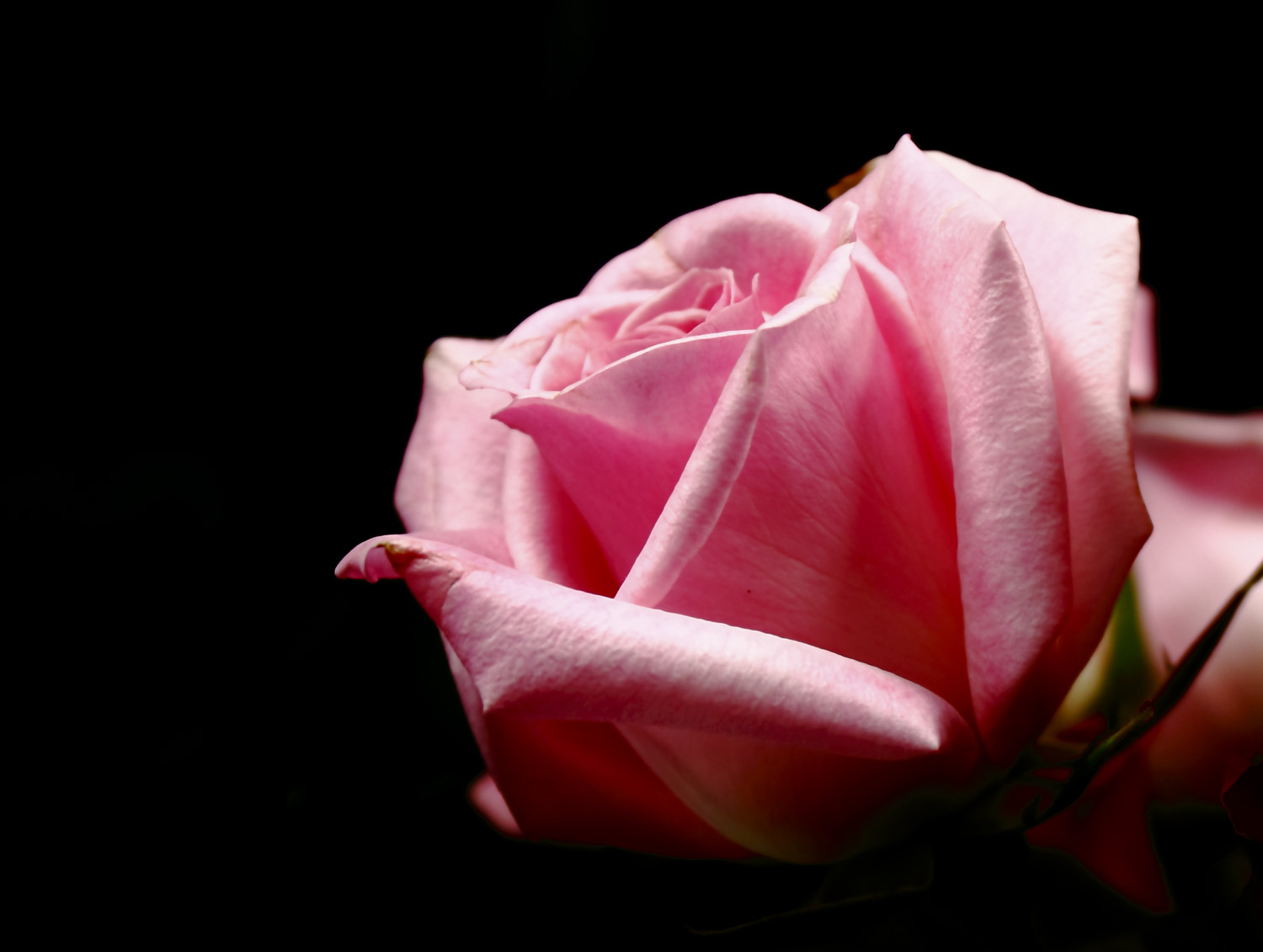 This post is a little different than usual and I don’t have any pictures of the food so I’ve substituted a few of my birthday flowers.  I had dinner with a friend recently and she made the most wonderful food I just had to recommend the recipes!  As we’ve pretty much established, I’m a picky eater and not too fond of anything beyond meat and potatoes and pasta so this is a real surprise.  Having seen the recipe I’m sure I would have never tried it as it has some ingredients I’m not used to and it does take some time and effort, but the Fried Chicken with Poblano Mashed Potatoes and Chorizo-Thyme Gravy from Epicurious.com which she served, along with their recipe for Roasted Corn with Manchego & Lime was absolutely wonderful and I fully intend to make it myself.  Everyone at the meal loved it and we all took home leftovers, which didn’t last long at our house! 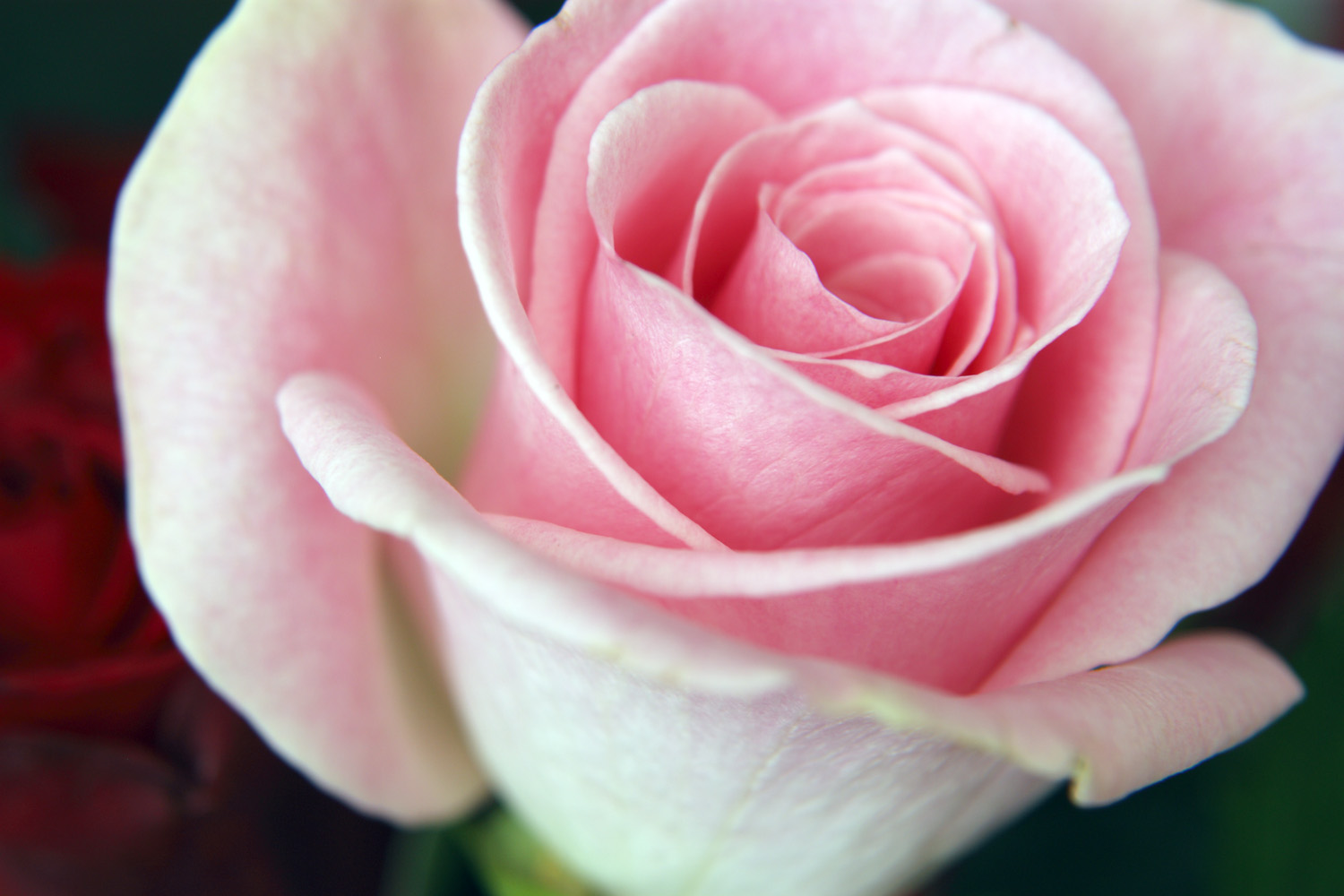 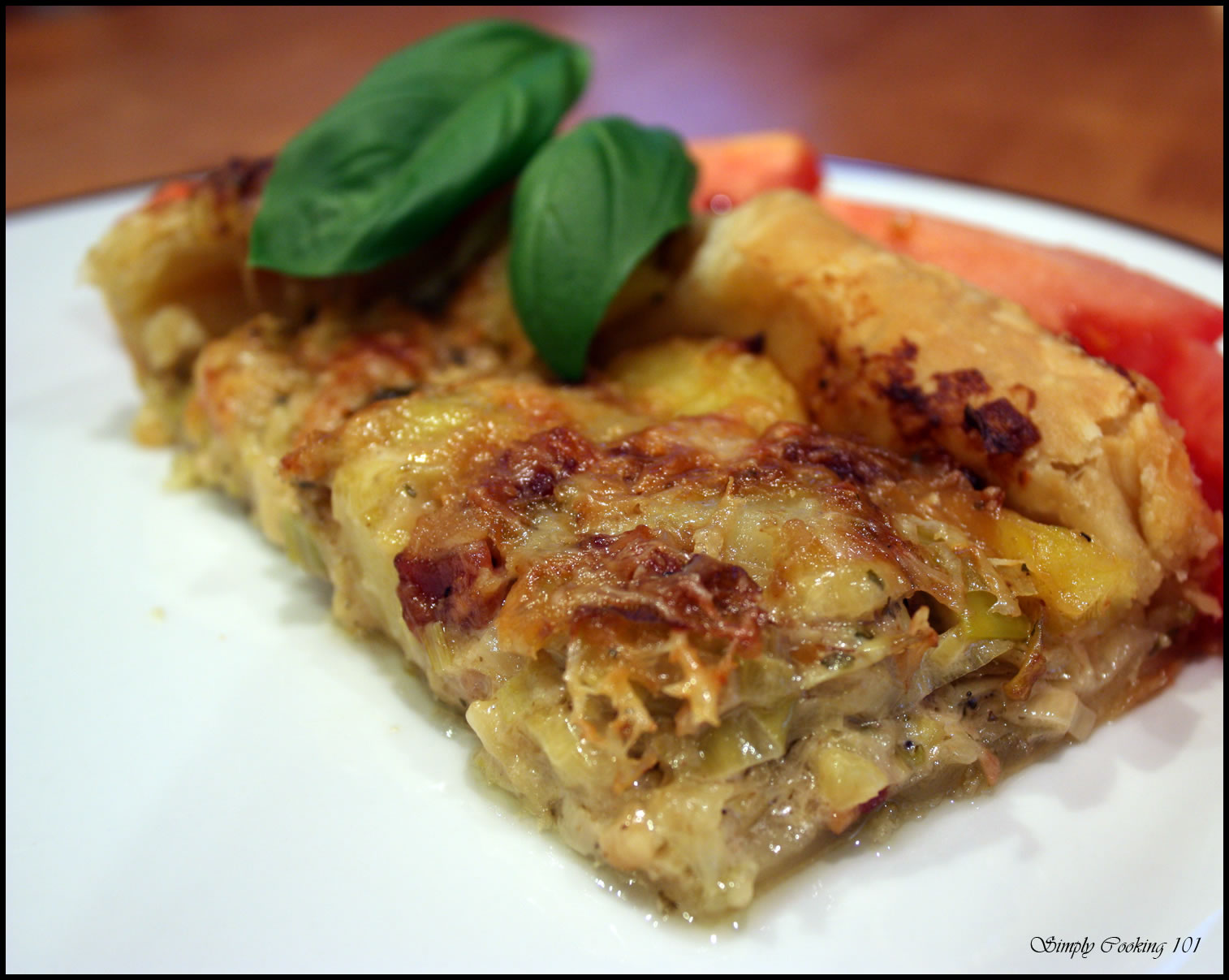 I’m sad to say this dish was just not very photogenic.  It has great flavor and was a big hit with family and friends but I just couldn’t get a good picture so I had put off posting it.  However, it was very tasty and I’ve been requested to put it up so here it is!
Printable Recipe for Potato Leek Tart
Ingredients:
1 pkg frozen puff pastry
4 slices of bacon chopped finely (optional)
2 large well washed and finely sliced leeks
3 cloves garlic
1/2 teaspoon pepper
1 lb peeled medium diced potatoes (I used Yukon Gold)
1 cup heavy cream
4 ounces finely grated Gruyère cheese
Procedure: 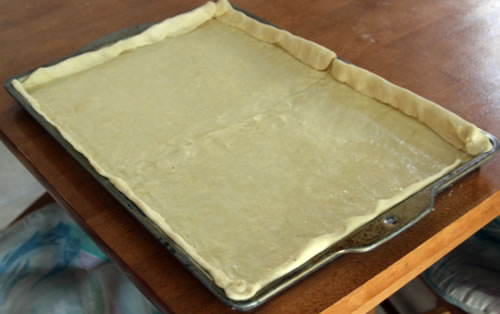 Place both sheets of pastry on a jelly roll pan pinching together the sheets in the middle to make one single layers and bake at 400 degrees for approx 5 minutes – it will not be fully done.  Remove from the oven and set aside, then reduce the oven temperature to 350 degrees.
Boil the potatoes in a large pot for 15-20 minutes, they should be firm but mostly cooked.
In a  large skillet or dutch oven, fry the bacon pieces until crisp.

Saute the leeks until wilted

Add the sliced leeks and cook until wilted.

Saute with garlic and pepper

Add the garlic and pepper and sauté for 1 minute

Add the cream 1/4 cup at a time while stirring constantly and allow most of it to absorb before adding another 1/4 cup.

Add the potatoes and mix well. 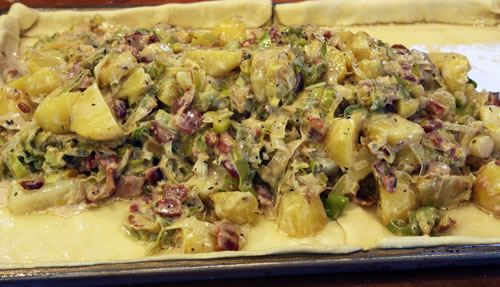 Pour onto the partially baked tart shell and spread evenly. 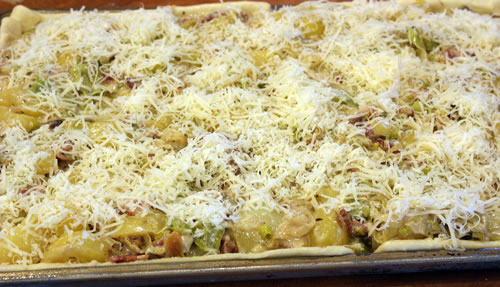 Sprinkle with the remaining grated cheese.  Bake for about 30 minutes or until the filling is browned and bubbling. 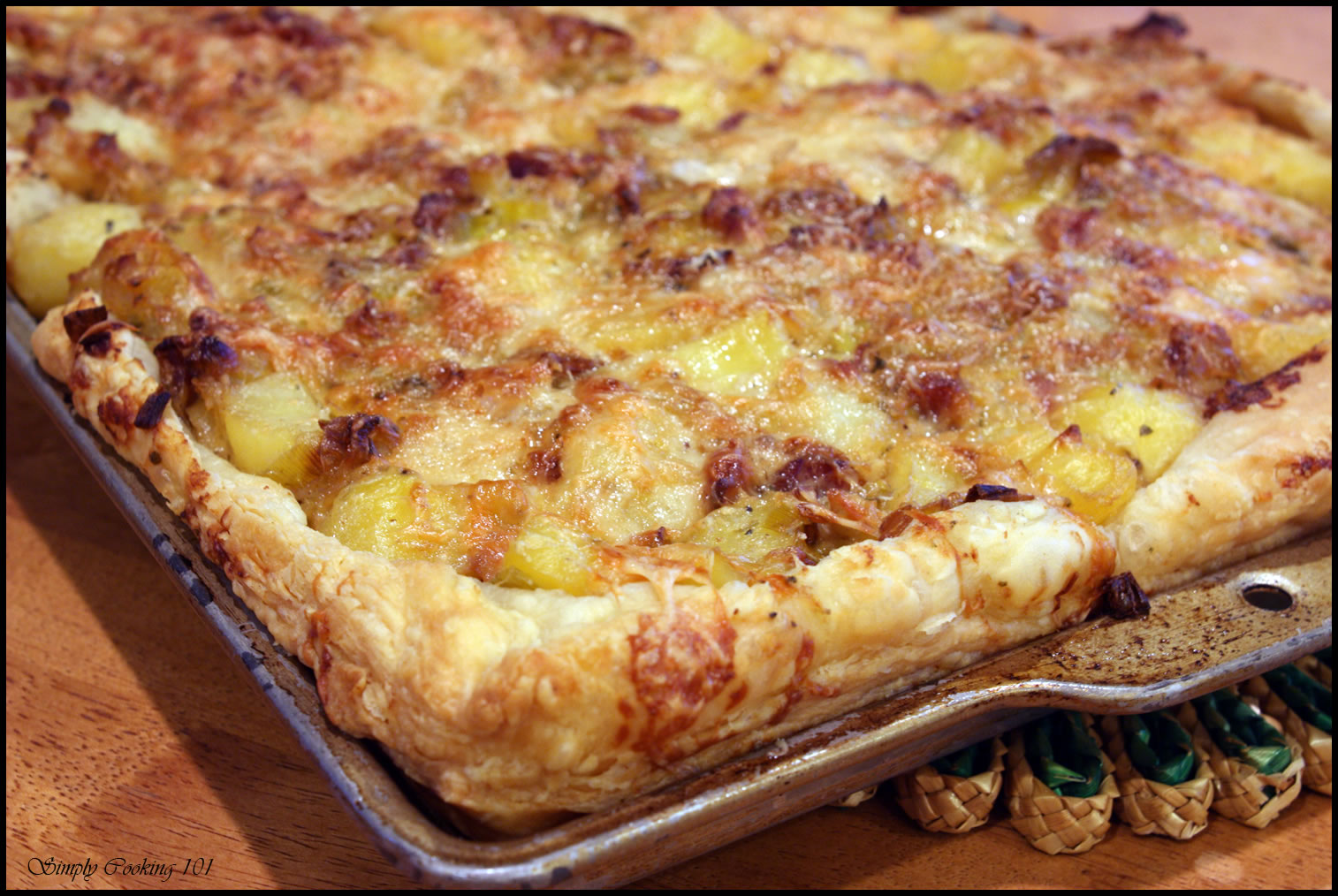