The March 2011 Daring Baker’s Challenge was hosted by Ria of Ria’s Collection and Jamie of Life’s a Feast. Ria and Jamie challenged The Daring Bakers to bake a yeasted Meringue Coffee Cake.  Since the recipe conveniently makes enough for two coffee cakes, I made a sweet (lime cream and toasted coconut) and savory (pizza of course) version.  Thanks to Ria and Jamie for a great challenge, the dough was great and I can definitely see lots of possibilities for the fillings.

In a large mixing bowl (had I thought ahead, I would have put this in my mixer’s bowl and saved some clean up) combine 1 ½ cups (230 g) of the flour, the sugar, salt and yeast.

In a microwave save bowl, combine the milk, water and butter and heat for about 1 minute until warm and the butter is just melted.

With an electric mixer on low-speed, gradually add the warm liquid to the flour/yeast mixture, beating until well blended. Increase mixer speed to medium and beat 2 minutes. Add the eggs and 1 cup (150 g) flour and beat for 2 more minutes.

Switch to the dough hook or using a wooden spoon, stir in enough of the remaining flour to make a dough that holds together.

Turn out onto a floured surface (use any of the 1 ½ cups of flour remaining) and knead the dough for 8 to 10 minutes (less if you give it a good mixing with the dough hook) until the dough is soft, smooth, sexy and elastic, keeping the work surface floured and adding extra flour as needed.

For the pizza version I added 2 tablespoons of Italian spice to the dough as I finished up the kneading.

Place the dough in a lightly greased (I used olive oil for the pizza version and vegetable spray for the sweet) bowl, turning to coat all sides. Cover the bowl with plastic wrap and a kitchen towel and let rise until double in bulk, 45 – 60 minutes. The rising time will depend on the type of yeast you use.

1 cup lime cream (I used 2 and it was way too much.) You could also use lemon or lime curd.

Once the dough has doubled, make the meringue:

In a clean mixing bowl – ideally a plastic or metal bowl so the egg whites adhere to the side (they slip on glass) and you don’t end up with liquid remaining in the bottom – beat the egg whites with the salt, first on low-speed for 30 seconds, then increase to high and continue beating until foamy and opaque. Add the vanilla then start adding the ½ cup sugar, a tablespoon at a time as you beat, until very stiff, glossy peaks form.

Punch down the dough. On a lightly floured surface, working one piece of the dough at a time (keep the other half of the dough wrapped in plastic), roll out the dough into a 20 x 10-inch (about 51 x 25 ½ cm) rectangle.

Add the pizza sauce in a thin layer with a pastry brush.

Add tomatoes, peppers and cheeses.  I didn’t use meringue on the pizza version (which contributed to me using way too much on the lime cream version)

Now, roll up the dough jelly roll style, from the long side. Pinch the seam closed to seal. Very carefully transfer the filled log to one of the lined cookie sheets, seam side down.   I opted to not make this one a roll and just left it log shaped.

Using kitchen scissors or a sharp knife (although scissors are easier), make cuts along the outside edge at 1-inch (2 ½ cm) intervals. Make them as shallow or as deep as desired but don’t be afraid to cut deep.  After the second rising, baste with the egg wash and sprinkle with a little extra Parmesan.

For the Lime Cream with Toasted Coconut:

Here’s where I really messed up.  I used way too much filling and all the meringue, forgetting that I had twice enough because I didn’t use any on the pizza version.  You are supposed to bring the ends of the log around and seal  together, forming a ring, tucking one end into the other and pinching to seal.   I ended up with a very bloated, lime and meringue covered blop which only got more bloated as it rose a second time.  Surprisingly, once it was baked it looked a lot better and tasted great so I guess it wasn’t so bad.

Cover the 2 coffee cakes with plastic wrap and allow them to rise again for 45 to 60 minutes.

Brush the tops of the coffee cakes with the egg wash. Bake in the preheated oven for 25 to 30 minutes until risen and golden brown. The dough should sound hollow when tapped. 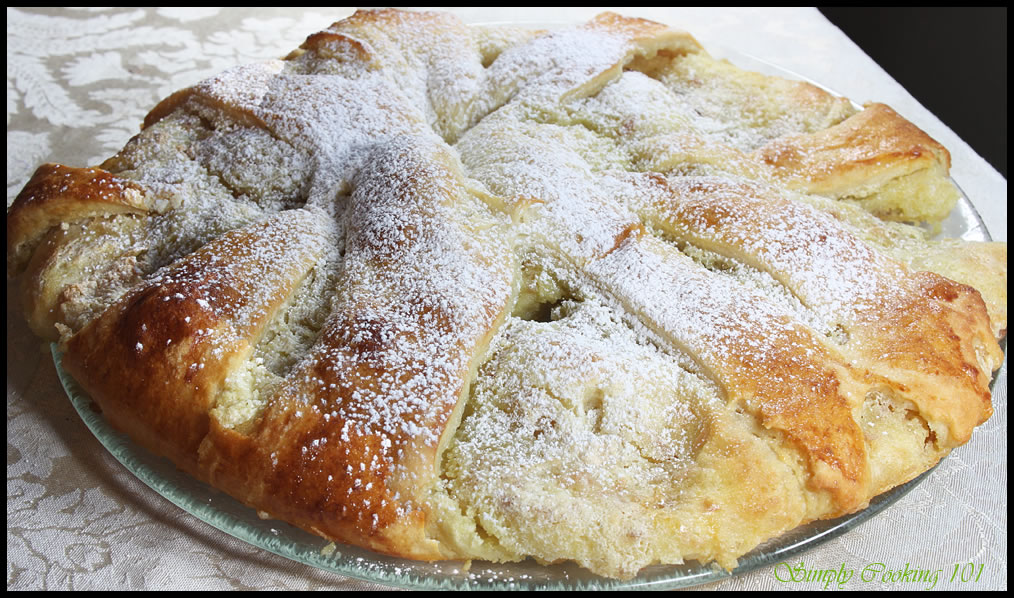