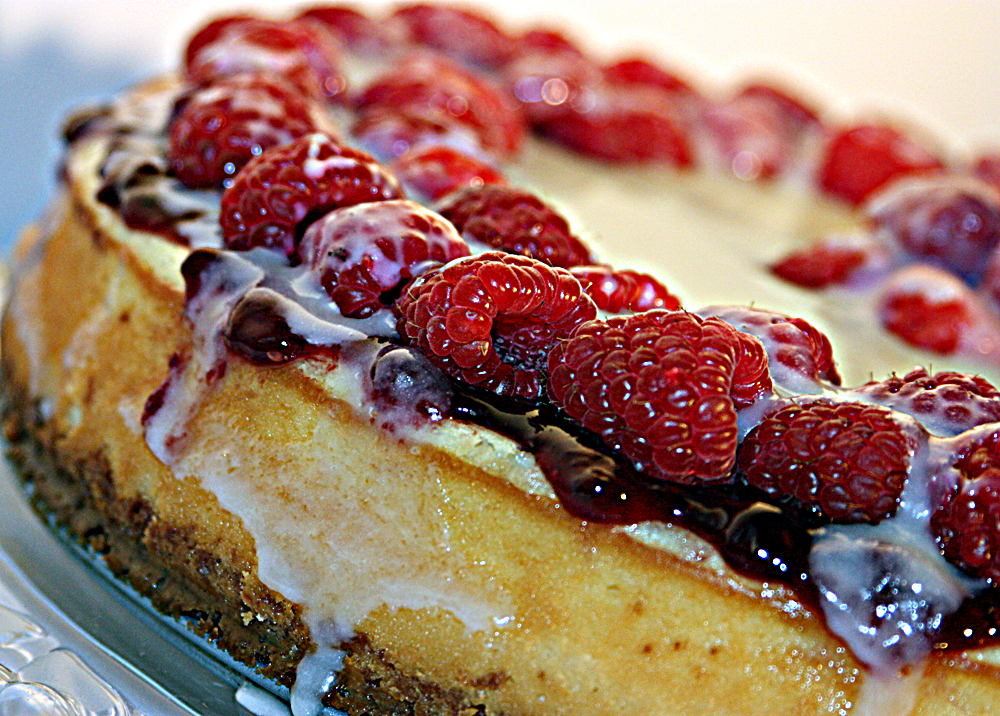 I made this as we were having some friends over for dinner.  I took these before the guests arrived, intending to take some pictures of individual slices later (there were only 5 of us so I assumed there would be plenty left).  However college son had a couple of his friends over later to watch a movie after I had gone to bed and apparently in dire need of “good snacks” they devoured the rest of the cheesecake.  I thought it turned out well, and apparently the boys agreed.  When I walked down in the morning to start working on the photos, there was nothing but a few crumbs left on the plate.This was inspired by a recipe I found on BigOven.com by jkrutherford.  I modified it somewhat, and used my own topping instead of the strawberry glaze it suggested.

1             In the bowl of a food processor, finely grind the almonds, then add the shortbread cookies pulsing until crumbs.  Add the sugar and melted butter pulsing until mixed.

3             Pour into the pan and bake at 325 degrees for forty minutes or until the edges are firm but the center is still a little soft.  Allow the cheesecake to cool in the oven with the door open for 15 minutes, then at room temperature for at least one hour.  A sudden temperature change will cause cracking so cool it gradually.

1             Microwave the whipping cream to just under a boil, about 1 minute, then pour over the white chocolate, stirring until it forms a smooth sauce.  Set aside, it will thicken as it cools.

5             Pour or drizzle the white chocolate glaze over the top of the berries.  There will be plenty left to put on the serving plate.