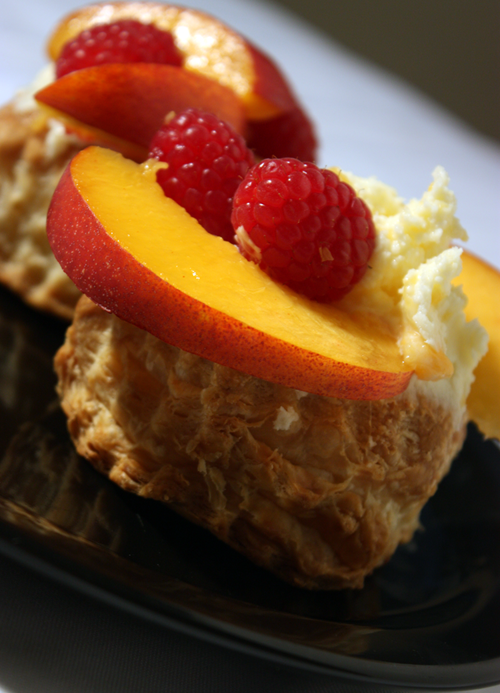 Once again with the raspberries, but soon the season will be over and I got a huge flat of them at Costco so I need to use them up.  This is an amazing filling and you could make the tarts with any fruits you have.   I adapted the recipe from one I found on BigOven.com.

Bake and cool shells according to package directions.

In chilled med bowl place remaining cream. Beat with mixer at med sped until soft peaks form. Fold half the whipped cream into white chocolate. Fold in remaining cream just until blended. If you like, you can fold about 1/4 cup of finely chopped peaches into the mousse mixture.  Spoon into shells and garnish with sliced peaches and raspberries.

This can also be made with 4 ounces of regular chocolate instead of the white chocolate.

If you haven’t noticed from the last few things I’ve made, I really like raspberries . . . in anything and alone but especially with cream and sugar.  I’ve been working on some new articles for Examiner.com on Las Vegas Baking so today is just a photo day.

I know, two desserts on a holiday – what a shock but we all know dessert is better than the meal!  This was a recipe combined from two sources, Emeril Lagasse’s Chocolate Pastry Cream and David Lebovitz French Tart Dough.  I found both recipes were excellent.  I didn’t have a 9 inch tart pan, only a larger one so it was a little skimpy but still good and simple, no rolling, no flour cloud in the kitchen and a nice crisp crust.  I did coat the crust with some melted chocolate and let it harden to keep it from getting soggy when I added the pastry cream.  After that, it was just a matter of placing the fruit on top.

I’m taking a 10 minute break from preparations, so I thought I would get this up, even though we are expecting guests any time now.  These Key Lime Bars are a favorite here and quite simple made from a recipe at America’s Test Kitchen, http://www.americastestkitchen.com/recipes/detail.php?docid=7683&extcode=M**ASCA00 .  The only change I made is using Pecan Sandies instead of Animal Crackers for the crust.  Son has eaten almost a whole batch on his own so I know they won’t last long!

Key Lime Bars on a Platter 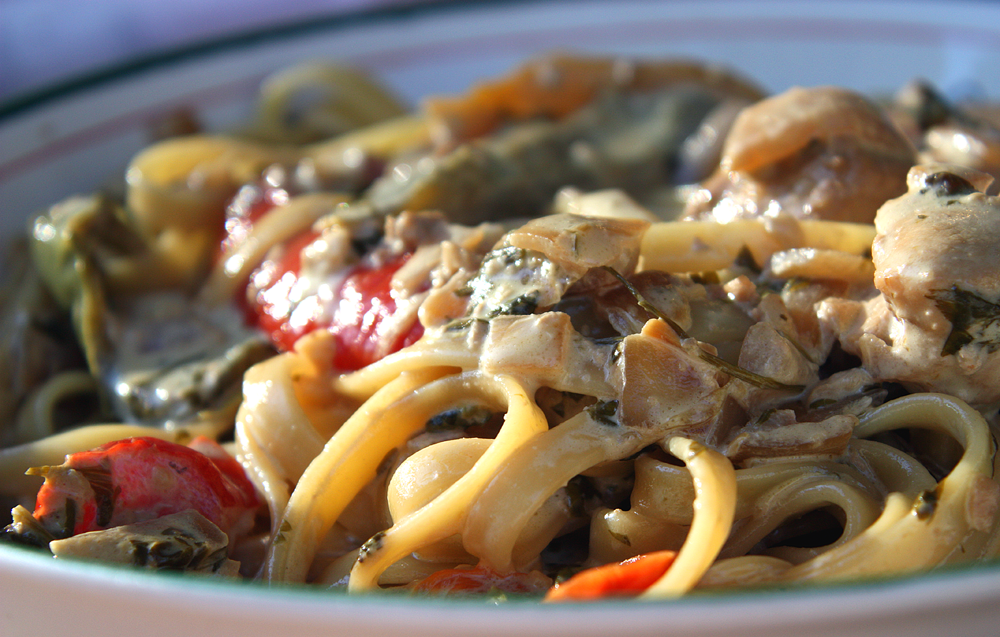 The first time I had this dish at California Pizza Kitchen I thought it was great.  I eventually found one of those “copycat” recipes that I think is very close.  This one came from http://www.cdkitchen.com/recipes/recs/512/California_Pizza_Kitchen_Chicken_Tequila_Fettuccine44247.shtml.  It has a little kick, but if you prefer really spicy you might want to add extra jalapenos.  I’m pretty much a wimp, and I usually add double what the recipe calls for as well as double the peppers using a whole one of each color.  Like any cream sauce, it doesn’t really reheat that well, but I’ve found that if you add just a splash of milk and microwave for the smallest amount of time to warm it up and stir well, it will come back nicely.